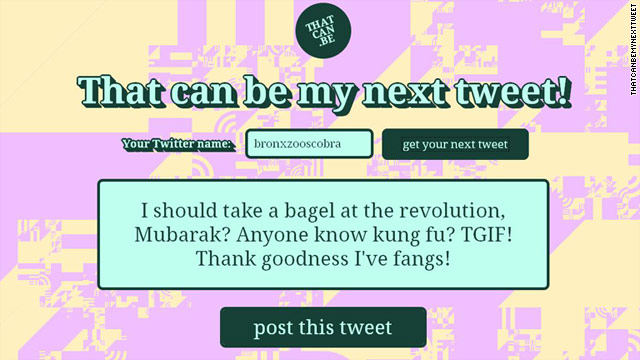 In this example, the Bronx Zoo cobra seems to be getting some breakfast advice from Egypt's former president.
STORY HIGHLIGHTS
RELATED TOPICS

(CNN) -- If your tweets, or those of the people you follow are getting a little stale, here's a way to give them a bizarre new twist.

"That Can Be My Next Tweet!" is an online tool that's starting to get some attention. Type in the name of any public Twitter feed, and it grabs words and phrases from that feed's posts and remixes them into a new tweet. Users can then post the results to their own feed if they so desire.

It's a bizarrely addictive little time-waster.

Sure, most times the randomly generated text makes up a jumbled mess of nothing. But on the rare occasion when phrases fall together just right, it's ridiculous internet magic.

The faux tweets come off sounding something like a mashup of Yoda, a freshman philosophy major and Caine from "Kung Fu." And those are just the ones that make the most sense.

(As the folks over at Mashable noted, news feeds that tend to create posts that are similarly structured seem to have the best chance of rendering something readable).

Here are some of our favorites generated while wasting time -- er, we mean, researching this investigative article:

@BronxZoosCobra: I should take a bagel at the revolution, Mubarak? Anyone know kung fu? TGIF! Thank goodness I've fangs.

@neilhimself: A word. that's good, yes? I can dream. same gag twice. We can construct proper sentences together.

@justinbieber: Just limping around the paps or being pulled into politics its chill OFFICIALLY getting these. because...