How to respond to online haters 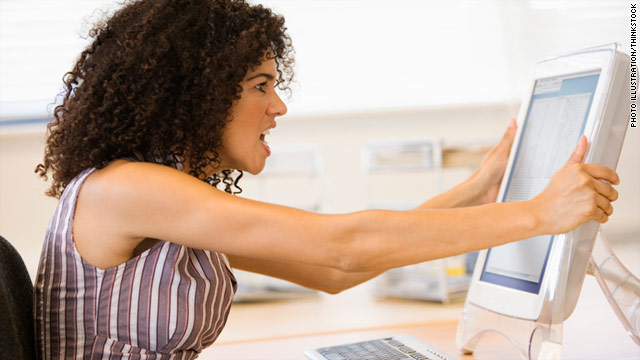 You have the potential to invoke someone's wrath with every blog entry, Facebook update and tweet.
STORY HIGHLIGHTS
RELATED TOPICS

(CNN) -- It's an empirical fact: There are people out there who hate you.

It doesn't matter how nice you are, or how many smiley face stickers and free hugs you dole out, there are probably a couple of people out there who rue the day you were born. (Likely us, if you do, indeed, dole out "free hugs.")

And never is this animosity so evident as it is on the Internet.

Think about it: Before the advent of the Web, the average person lived in blissful ignorance of the ire of others, only catching whispers on the windblown grapevine of malcontent.

Now, you have the potential to invoke someone's wrath with every blog entry, Facebook update and tweet.

So how does one respond to this digital dislike? Read on, dear readers (10% of whom we likely disdain, and vice versa):

In the event of a passive-aggressive Facebooker

There are more than 650 million people on Facebook, and unless you're a solid adherent to Dunbar's Number and have carefully restricted those friend requests, you're probably "friends" with a couple of people you wouldn't actually call "friend" in real life.

You know: high school classmates/tormentors, exes, former friends with whom you've had a falling out. If you were to run into said people on the street, they would probably do the whole, "I'm staring at this poster for a children's yard sale that occurred three weeks ago very intently and therefore do not see you" thing.

On Facebook, some do the virtual equivalent: They block your access to photos and wall posts, (likely) remove you from their news feed and immediately toss out a "Not Attending" four seconds after you send them an invite to your "Sock Puppet Sock Hop."

Yup, you're trapped in "I'm being polite, but I hate you" limbo, dear friend, and it's time to go on to the next world: one in which only friends dawdle in the sweet groves of amity. Translation: Unfriend those people posthaste.

You have to grudgingly tolerate co-workers, extended family and B.O.-ridden elevator-sharers on a daily basis; don't let that same lenience spread into the realm of America's Favorite (Eye-glazing) Pastime.

Twitter wars have become the modern-day equivalent of the battles between Roman gladiators -- epic, public clashes that seem staged for the delight of a packed arena of rapt onlookers.

We've seen some pretty intense examples in the realm of the celebrity (Kanye West, Courtney Love and various and sundry reality stars are repeat offenders), and, on a less buzzed-about scale, between friends and acquaintances.

"Social networking sites such as Facebook and Twitter may bring (animosity) out more because of the massive and ready audience they supply," says Elias Aboujaoude, M.D., a psychiatrist and author of "Virtually You: The Dangerous Powers of the E-Personality."

While the worst thing that could happen to a gladiator was being ripped limb from limb and possibly consumed by a lion, Twitter warriors face a much more dire (although less fatal) fate: an eternally damaged reputation.

(Remember, guys, all of your tweets are being stored in the Library of Congress as we speak.)

Why? Because Twitter fights are not courageous -- they're tacky. If someone slights you in 140 characters, we suggest sending them a Direct Message (if you give a damn about their opinion), or just blocking them and sticking to straight-up schadenfreude when it comes to entertainment.

In the event of an all-out war

If you have a blog, YouTube channel or prominent place on an online forum dedicated to live action role-playing, you're going to have to fortify your gates against the trolls.

As a general rule, if an under-the-bridge dweller sends you a mean e-mail, flames you in the comments section of your blog or pontificates on your unattractiveness under your latest cat grooming tutorial on YouTube, just don't engage.

Said bumpy-faced one is looking to get a rise out of you, and executing a counterstrike will only result in more wholly eloquent zingers in the "YOUUUU SUKKKK" vein.

Sports columnist Jeff Pearlman decided to track down and confront his trolls for a CNN column and found the whole ordeal to be an exercise in futility.

"It's sort of like stomping out ants with your foot," he says. "It works temporarily, but then the ants come back even stronger. Truthfully, you're better off pretending these people don't exist. Because they're crying to be noticed; to have the platform you have. Engage them, you make their wish come true."

Still, that doesn't mean you have to suffer in martyred silence all the time.

"We should remember that any information attached to our name, whether it's accurate information we supply ourselves without thinking or mean-spirited and inaccurate statements made about us by haters, is going to stay online forever," says Aboujaoude. "That is why standing up to hecklers can be an important part of maintaining our online reputation."

A simple fix is simply deleting any outright racist, rude or misogynistic comments from your own personal domains, or flagging abusive sentiments on the domains of others, and then contacting the webmaster. Or, you could be a little more creative.

There have been some instances in which folks have stood up to trolls in a manner that entirely obliterated the original slight.

For example, after one commenter posted a scathing -- albeit horrifyingly misspelled -- rant under a game on content creation site Newgrounds, the actor who voiced the game teamed up with a graphic designer to create a video dramatizing the venom-tinged words in all of their grammatically incorrect glory.

That video, "dot dot dot," went viral, in no small part because it was a clever retort to an impassioned troll, rather than a messy attack. The troll in question even "Favorited" the video.

Sure, you can't make everyone on the Web like you. But grudging respect is sometimes more satisfying than blind adoration, anyway.