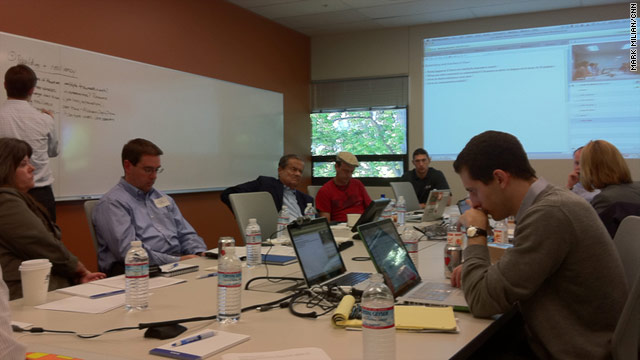 Disaster-relief organizations and government officials gathered at Facebook's offices to discuss how the website can help.
STORY HIGHLIGHTS
RELATED TOPICS

Palo Alto, California (CNN) -- Facebook is already adept at handling public-relations blunders, but the company is beginning to focus on how it can help with real calamities.

About a dozen disaster-relief workers from governments and nonprofit organizations convened this week for a five-hour meeting at Facebook's offices here in Palo Alto, California, and via teleconference from Washington.

"Thank you so much for inviting us here," Kelly Huston, a Cal EMA spokesman, said near the end of the assembly. "I know your interaction with government isn't great because we're suing you all the time for privacy issues."

Meanwhile, another Facebook privacy debate was stewing during the meeting when Facebook began widening the reach of its facial-recognition feature. European Union regulators will hold an inquiry about the matter, Bloomberg reports.

Site administrators currently manage a page called Global Disaster Relief on Facebook. It has about 540,000 members, or less than 1% of Facebook's total user base -- but still more than the combined Facebook fans for all the groups that attended the meeting.

FEMA and the American Red Cross representatives offered occasional insights from Washington. FEMA Administrator William Craig Fugate, who was appointed by President Barack Obama in 2009, met with Facebook in October but was not present at this week's meeting.

"Discussions like these help us learn from each other about what is working well and what isn't," Shayne Adamski, a FEMA senior manager who attended the meeting, wrote in an e-mailed statement.

For some, the affair was an education seminar, a chance to ask questions to the masters of the platform.

Wendy Harman, the social media director for the Red Cross, expressed frustrations with managing Facebook pages. "It makes me want to cry thinking about making 80,000 instances and updating them into eternity," she said.

"We can play a really important role in educating," said Dave Steer, who manages Facebook's trust and safety team. "This is one of the reasons we convened this kind of forum."

The Red Cross extended an open invitation to Facebook to embed with its disaster-relief team, Harman said.

Google, which has more than 20 times as many employees as Facebook, devoted a "small team" last year to building projects that help provide disaster-related news or organize search efforts for missing people. Tumblr, the blogging platform, has added buttons to its site that encourage bloggers to donate to disaster relief efforts.

Facebook was less apt to promise dedicated resources from its 2,000 employees.

"How do we leverage some of the minds of the people who work here to tackle the technical problems?" he asked.

Some weren't fully convinced of Facebook's dedication to the cause.

"I know that Facebook is a platform, and you want to push that, but going beyond marketing Facebook," said Heather Blanchard, co-founder of the nonprofit Crisis Commons, "part of it is about recording history."

"You have an entire research population hungry for what you know," she added.

Facebook plans to discuss the feedback it received from the organizations over the next few weeks and will determine how best to handle the requests.

Tuesday's agenda included a brainstorming session for a Facebook application dedicated to disaster relief, but the concept wasn't discussed at length. Facebook liaisons offered technical guidance and recorded talking points and ideas on whiteboards: one bolted to the wall and the other projected digitally.

Social media tools have quickly become a mainstay for disaster response in many countries. Twitter saw the third-highest activity on its service after the Japan earthquake in March, a spokesman said.

Justin Osofsky, Facebook's director of partnerships, highlighted "stuff that happens organically" in response to disasters, such as the page for finding items lost during the Joplin, Missouri, tornado. By highlighting these grassroots programs in addition to promoting those from government and nonprofits, Facebook thinks it can help.

"There's a thirst for information," Steer said. "Now the onus is on us to quench that thirst."