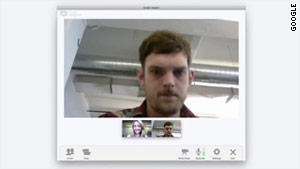 (CNN) -- With Tuesday's debut of Google+, a new social network, comparisons to Facebook are inevitable, and immediate.

CNN.com has yet to demo the service, which lets users gather and organize contacts through such Google products as Gmail and Picasa.

But based on what Google has posted about it online, here are some initial impressions.

Punch for punch, Google+ reproduces some of Facebook's most popular tools but adds one distinctive function: video chat.

Google refers to the video service as Hangouts. Several friends can join a room, and the live feeds from their webcams appear as separate blocks along the bottom of the window. The main video box shows the person who's speaking the loudest at any given time. Hangouts can also integrate with Google's YouTube.

By contrast, Facebook hasn't made video conferencing available on its website. But the social networking giant has a close relationship with Microsoft, which acquired Skype last month. Recent versions of the Skype desktop software tie into Facebook's services.

With Hangouts, Google+ has at least one technological advantage over Facebook. But Google's apparent ambition is not to unseat Facebook right away. Google has set up barriers to fast adoption, as it has done with some of its other products, by only allowing people who have been invited by friends to use Google+.

When crafting a service to take on Facebook, Google was wise not to ignore what that popular network, with its more than 600 million users, already does well.

Google+ has photo sharing, which places a large emphasis on smartphone usage. For example, photos taken from an Android phone can be automatically dumped into a private folder in the Google+ Web service, a la Apple's iCloud.

The Circles section in Google+ is like Facebook's friend lists. Each user can organize friends into categories and limit which group sees which parts of his profile. With Circles, users can more quickly send certain messages to a particular crew, such as siblings or frat buddies, that they wouldn't want to share with their entire list of contacts.

The +1 button, which was previously made available as an optional program for Google account holders, ties this all together, not unlike Facebook's "Like" button. Clicking +1 on Google search results, embedded on other sites or from within Google+ pages, allows you to share links with friends or selectively with groups of friends.

Unsurprisingly, Google has tapped its prowess in Web search for a section called Sparks. It's like Google Alerts, for receiving updates on favorite topics. Facebook's search engine is Microsoft's Bing, but users of that site can't subscribe to updates in this way.

Google appears to be rejecting the idea that Google+ is meant to take Facebook head on. Google says its service is for more tight-knit groups, rather than for all types of online interactions.

"The problem is that today's online services turn friendship into fast food -- wrapping everyone in 'friend' paper," Google executive Vic Gundotra writes in a blog post. "We'd like to bring the nuance and richness of real-life sharing to software."

Eric Schmidt, Google's executive chairman and former CEO, took a more directed swipe at Facebook last month. At a technology conference, he described the service as catering to "every friend you've ever had, including the ones you can't quite remember."

Google suggests that it has plenty more to show. The company repeatedly refers to Google+ as a "project," indicating it will change over time.

"This is just the beginning," Google said Tuesday. "We're just getting warmed up, and we're already pretty excited about what's coming next."