5 tips on how to manage online anger 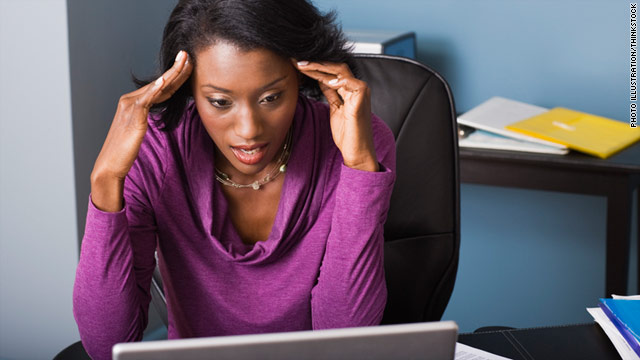 Before you lose your online cool when anger takes over, step away from the computer and turn off your smartphone.
STORY HIGHLIGHTS
RELATED TOPICS

(CNN) -- Anger is coursing through your veins like hot, cliched lava. It feels like your head's fixing to uncap itself, a cartoon mushroom cloud bursting from your cranium and firecrackers erupting from your ears.

Well, unless you want to find yourself subsequently cradling that busted brain in your hands -- regret leaking from your eyes in the form of bitter, bitter tears -- you'd best step away from that monitor and power down your smartphone.

By now, we all know that it's unwise to drink and Facebook (and text, and e-mail and do anything that involves other people, really), but it seems that we haven't quite learned our lesson when it comes to lashing out via social media.

Just the other week, a PR flack for video game "Duke Nukem Forever" took to Twitter to vent his anger after reviewers ripped apart his client. Predictably, his job didn't survive the fallout. And he's not the only one to have been sacked for his SM transgressions.

But a job isn't the only thing you could lose via losing your online cool -- you could bust up friendships and relationships, too. We get it: It's easy to rip the Web a new one when you're really raging. It feels like you're yelling into the vast void.

You're all alone in your digital bubble, unable to see the direct effect your words are having on others or gather the physical clues necessary for an appropriate response. Hence, the aforementioned head explosion.

Read on for five tips on how to manage your online anger.

Your best friend just sent you a text message reading: "Oops, I made out with Joe last night... That was a mistake." Joe is, incidentally, your boyfriend. Before you fire off a missive containing a litany of words that rhyme with punt, snitch and basshole (which isn't a word), fire up the appropriately named "Angry Birds," or something of the sort.

Take your aggression out on those pigs and birds and... OK, we've never actually played this game. Either way, by the time you're a few rounds in, you'll be calm enough to read her next text: "JON. I meant JON. Damn you, autocorrect."

2. Write an e-mail to yourself

Your co-worker has just done something supremely stupid (The only skill on his resume is "nepotism"). Before you fire off an e-mail in ALL CAPs (never do that) and push "send," put your own e-mail address in the subject line and type out a tester e-mail.

Let 15 minutes pass and then take a look at what you were aiming to send. "YOUR A IDIOT, LARRY! AND YOUR COLOGNE SMELLS LIKE MONKEY DROOL" is probably not all that motivational. Revise and resend.

3. Dig up your funny bone

There's a reason there's an entire blog titled "Dumb Tweets at Brands." Yes, your Wendy's burger might not be square enough -- we feel you, this is a legitimate complaint -- but blather on and on about it on Twitter and you'll just end up looking, well, dumb.

If you do have an ounce of humor in your cholesterol-soaked body, might we suggest starting a humorous Twitter feed instead? Like @BPGlobalPR, an account that popped up after last year's Gulf Coast oil spill. Channel your spite into satire, and you'll look much smarter.

Unless you've actually taken the time to figure out Facebook's ever-changing privacy settings (you should probably do so posthaste), everyone and their mom -- and your mom -- can probably see your profile. While most of the time, no one really gives a damn what you have to say, there are rare instances when Joe Everyman becomes an anti-hero for exceptionally stupid status updates.

After the Vancouver riots that erupted following the Vancouver Canucks' Stanley Cup loss, a gentleman named Brock Anton took to Facebook to brag about the destruction he helped cause: "Through the jersey on a burning cop car, flipped some cars, burnt some smart cars, burnt some cop cars, im on the news ... one word ... history :) :) :)" Naturally, that status went viral, and Anton became a symbol of violence. He even earned his own anthem, "The Ballad of Brock Anton."

While you're likely not as stunningly dense as Anton, you've probably typed something you regret into the old status bar at one point or another. (According to a new study from Retrevo, 35% of Americans have posted something online that they later regretted.)

When you're fixing to rage (or brag about said rage), try to see your page through your mother's eyes. Is she crying? OK then, maybe reconsider that rant about how none of the strippers at the party last night liked you.

Sitting in front of a computer all day would make anyone angry. Go get some sun, zombies.