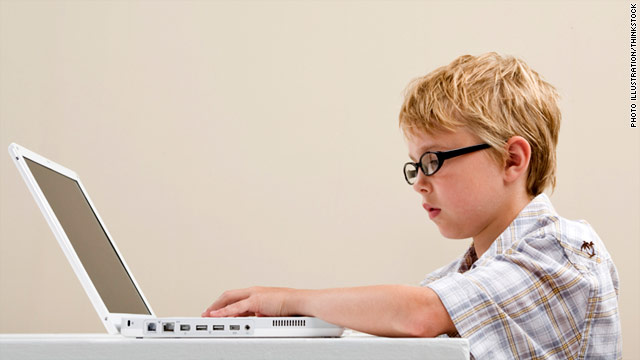 About 7.5 million children younger than age 13 have Facebook accounts. Are you terrified yet?
STORY HIGHLIGHTS
RELATED TOPICS

Omar L. Gallaga writes about technology for the Austin American-Statesman and the newspaper's tech blog, Digital Savant. He sometimes contributes to NPR's All Tech Considered segment on "All Things Considered."

(CNN) -- By now, we all know the story of how Facebook started young by channeling the desires and delusions of smart Harvard students and spreading across college campuses.

Then it got older and older, pulling along in its oceanic wake young professionals, their friends, their parents and their grandparents.

Recently, though, there have been fears that the site is getting too young. While Facebook's guidelines say the site is meant for those 13 and older, evidence suggests many younger kids are using the social network.

According to a study released by Consumer Reports, about 7.5 million children under 13 are members. How did they get there? What do they want? Are you terrified yet?

Facebook itself may not consider its underage users to be a problem. Founder and CEO Mark Zuckerberg has suggested the company may wage a legal fight to change or repeal the federal Children's Online Privacy Protection Act, which restricts what private information a website can collect from kids younger than 13 without a parent's permission. (Zuckerberg, by the way, doesn't have kids.)

If Facebook is successful, it could create a much larger problem for all of-age Facebook users. Any parent who has ever been to a pizza party knows how quickly children can overrun a desired destination and turn it into a screamy, sticky, Day-Glo disaster area for everyone else in the vicinity. They are like locusts -- cute ones -- in Hello Kitty shirts and light-up Velcro shoes.

Kids are wonderful. They are, I'm led to believe in song, the future. But before we teach them well and let them lead the way (a plan fraught with pitfalls), we should be aware of what the constant, sanctioned presence of, say, 5- to 12-year-olds on Facebook will do to the service.

Here are just a few ways Facebook could change if it is overrun by the Dora generation:

Remember when all your friends were playing "Mafia Wars," "FarmVille" and "Bejeweled Blitz," updating you constantly about their new pear tree or their cornering of the (virtual, we hope) crack cocaine market?

Get ready for thousands of invites to play "The Backyardigans in Space!" dozens of puzzle games based on Silly Bandz and other entertainment options you'd otherwise successfully avoid. Hope you like "Cars 2!"

Facebook's Poke feature never really got much traction; it remains a relic of the early days. But don't tell that to the kids. Their increasingly vocal demands (they're great at whining) would pressure the social network into expanding the Poke option to include Shove, Gleek, Wet Willie and Pull Hair.

Most of these will be used to communicate that a kid likes someone, but, you know, not necessarily "like" likes them. For that there's already a Like button.

There's always something a little sad about someone pushing 40 or 50 using a 20-year-old photo of themselves as their avatar. When kids on Facebook start hitting their awkward stages, they'll shield themselves by replacing their profile pictures with images of themselves as infants. It will be disturbing for everybody.

Sixty percent of Facebook events will be related to Chuck E. Cheese or Gymboree. In a brilliant bit of cross-marketing, Facebook credits will be redeemable for virtual versions of Chuck E. Cheese's ticket prizes, including erasers, colorful silly straws and large, full-screen-sized stuffed animals which no one will ever earn enough prize tickets to claim.

The at-one-time indecipherable leetspeak written language, made popular with online forums and texting, will give way to an even more impenetrable shorthand used by kids. It will be made up of ones and zeroes, binary coding that refers to specific scenes, situations and dialogue in "iCarly" episodes. Facebook will be forced to offer its service in this new language, iCarlyrillic.

An exodus of twentysomethings

Childless social media addicts in their 20s will find Facebook's sudden population shift to be such a buzzkill they will exit the social network en masse to escape the suffocating feeling that aging is a real thing -- and that they might one day be charged with taking care of one of these tiny, voracious creatures.

Please don't misunderstand me. I like kids. I have two of my own and soon they'll be old enough to bluff their way into Facebook and start posting things that will make me age even more rapidly.

Do I want to socialize with them on Facebook? Absolutely not. And neither should you. Every time the subject of "Facebook" comes up, I plan to change the subject with a quick offer of ice cream. It's going to cost me a lot of money, but it might buy me a few months, at least.