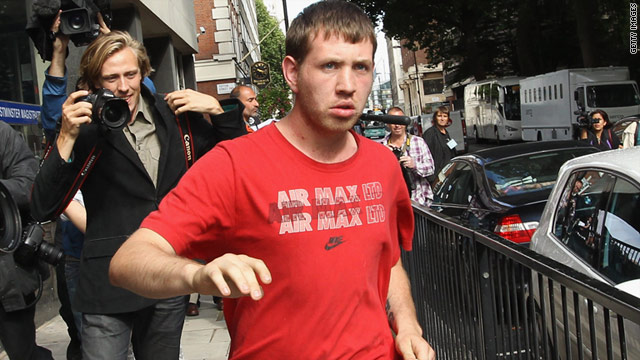 (CNN) -- British Prime Minister David Cameron thinks he's found some culprits to blame in the recent riots that have rocked London and other cities -- Facebook and Twitter.

Saying the "free flow of information" can sometimes be a problem, Cameron's government has summoned those two social-networking sites, as well as Research In Motion, makers of the BlackBerry, for a meeting to discuss their roles during the violent outbreaks.

"Everyone watching these horrific actions will be struck by how they were organized via social media," Cameron said Thursday during an address to Parliament. "Free flow of information can be used for good. But it can also be used for ill. And when people are using social media for violence, we need to stop them."

Cameron said that government officials are working with authorities "to look at whether it would be right to stop people communicating via these websites and services when we know they are plotting violence, disorder and criminality."

More than 1,200 people have been arrested nationwide, Cameron told lawmakers. One estimate found that UK retailers lost more than than £100 million ($161 million) in stolen goods and property damage over four nights of rioting.

Behind the scenes of UK riot reporting

Cameron, a Conservative, seems to have support for a potential crackdown, even from members of the opposition Labor Party.

"Free speech is central to our democracy, but so is public safety and security," said Ivan Lewis, the shadow secretary of culture in the House of Commons, according to London's Guardian newspaper. "We support the government's decision to undertake a review of whether measures are necessary to prevent the abuse of social media by those who organize and participate in criminal activities."

Home Secretary Theresa May has called for meetings with the three companies in the coming weeks, according to British media.

Twitter and Facebook have been used as well, although those sites also have been used to organize cleanup efforts and calls for peace in the wake of riots that started in London's Tottenham district on Saturday after police shot and killed a man.

Representatives of Facebook and Twitter said they're happy to meet with the government, although both would presumably object to being censored or shut down in the UK.

Twitter has said it has no intention to block accounts or delete posts, while Facebook has said publicly that it already shut down pages that explicitly incited violence.

Research in Motion's Inside BlackBerry blog was hacked Tuesday after the Canadian smartphone maker suggested it would cooperate with London police to help identify rioters who may have used BlackBerrys to plan mayhem.

"It may be tempting to smother that kind of speech when a government feels it is under siege, as Britain seems to feel that it is," wrote Matthew Ingram of tech blog GigaOm. "But doing this represents nothing less than an attack on the entire concept of freedom of speech, and that has some frightening consequences for any democracy."

Ingram questioned whether the government would be cracking down on telephone use or people talking about the unrest at their local pub if social media didn't exist. "That seems unlikely (although not impossible). But the British government's apparent willingness to consider shutting down or blocking access to Twitter and BlackBerry's BBM falls into the same category."

"Banning those convicted of crimes from accessing social networks (the idea being that they used such access to organize criminal activities) is no different than banning the same criminals from accessing goose quills and ink pots," Hopkins wrote. "It will have zero effect on crime, aside from criminalizing social media itself."