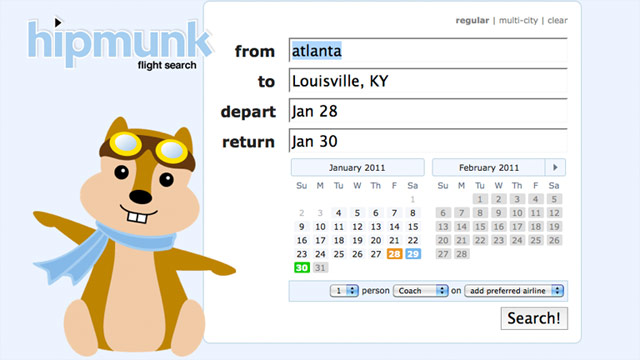 Hipmunk is fixing everything that's wrong with flight searches with a tool whose usefulness is immense.
STORY HIGHLIGHTS
RELATED TOPICS

(Mashable) -- There are more than a trillion URLs in Google's index. Yes, that's a one with twelve zeros after it. And Google crossed that milestone two and a half years ago. With so many sites on the web in 2011, how do you know which to pay attention to?

Mashable's editors haven't quite visited a trillion pages, but we've checked out a lot in the past year, and we've compiled a list of 10 websites we think are poised to have big years in 2011.

Some of these are relatively new sites we think will catch the mainstream's attention next year and others are older sites that we think will finally hit the big time in 2011.

Check out our list below and let us know in the comments which websites you have your eye on for the coming year.

Kickstarter, a crowdfunding platform for creative endeavors, was founded in April 2009 and had what many would consider a break-out year in 2010. But the site could be poised for an even bigger 2011.

The unique all-or-nothing approach to funding has struck a chord with both creators and funders and is allowing enterprising individuals to bypass traditional establishments to create films, music albums, events, products and even new companies.

Kickstarter helped hundreds of projects raise millions of dollars in 2010. Look for that number to continue going up in the next year.

OpenLeaks may very well be the WikiLeaks alternative in 2011, not as a destination, but as an enabler for media organizations to do the same as WikiLeaks.

OpenLeaks, unlike WikiLeaks, seeks to be an intermediary between whistleblowers and other organizations and includes former members of WikiLeaks, most notably, Daniel Domscheit-Berg.

The site will focus more on being a technological service for news organizations, likely enabling them to make it easier for their readers to submit such leaks to their own sites.

This may keep the scrutiny from politicians and officials -- something WikiLeaks has had to battle with this year -- away from OpenLeaks, as they won't be the ones publishing the material.

As social marketing starts to surpass traditional marketing methods, companies will look for influential individuals who can rep their product well. Klout is one of the tools that companies use to gauge who the social influencers are. Look for them to make some big moves in 2011.

Hipmunk is fixing everything that's wrong with flight searches with a tool whose usefulness is immense. Once people get used to the interface and start telling their friends about it, Hipmunk's popularity will skyrocket.

Gilt Groupe, which hired its 500th employee in 2010, is rapidly expanding into new verticals (such as location-specific group buying deals, a la Groupon) and territories (like Japan).

Its next target? Full-priced retail. It's launching a men's e-commerce site in February. Expect to see further development in that area and the geographical expansion of its existing products in 2011.

Diaspora, the open source social network platform, released its code and opened up to private alpha invites recently. The platform was dubbed the alternative to Facebook, during Facebook's privacy fiasco, and generated a lot of buzz.

But as the platform opens up to more users in 2011, we'll see how people react to it and whether it's something that will actually be an alternative option to the social networking giant.

Quora has clearly found its place with the early adopter set and a number of active, high profile users who make the service interesting to engage with. In 2011, it will be interesting to see if the company is able to expand its audience while maintaining the quality Q&A that has made it so attractive to users thus far.

In turn, we'll see if it's the next big thing or has a destiny more like that of FriendFeed, a community that was initially popular with early adopters but never found a mainstream audience (but ultimately found a home at Facebook).

Among the many music streaming services in existence today, Grooveshark is one of the few that is both free and available to Europeans.

It has a sleek, Google-like interface and a database with a huge amount of music (the service lets anyone upload music, so you can find many obscure, unknown, local or upcoming bands there).

It also has an interesting array of features, such as skinnable interface, playlists, music sharing and promotions that don't feel like ads, and it relies on a freemium business model that offers just enough to entice users to subscribe.

Barring possible problems with copyright holders and cash flow issues, which always threaten to shut down services like this, Grooveshark might be the next big thing in online music.

WordPress might get most of the love in the open source CMS space (for good reason), but Drupal provides a powerful option for individuals, organizations and brands that want to power complex, robust sites.

With Drupal 7 set for release in early 2011, the Drupal team is actively addressing the one area the CMS has always received criticism: Usability.

Thanks to shops like Development Seed and Lullabot, the Drupal ecosystem is becoming extremely impressive. Acquia, the commercial company from Drupal founder Dries Buytaert, continues to raise funding and offer an array of commercial and support services that better enhance the platform as a whole.

I expect Foursquare to scale to an even bigger level in 2011. I won't be surprised if it starts to acquire smaller companies or make a major move to Silicon Valley, in order to make that happen.