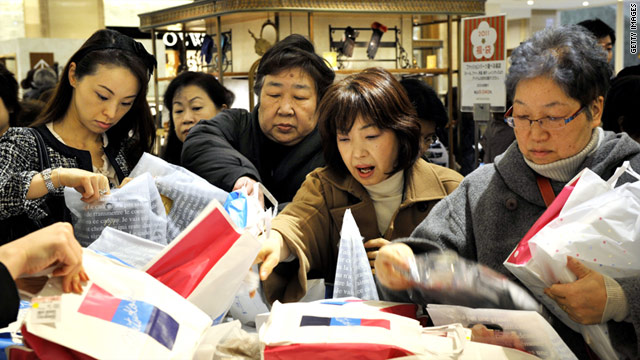 But how will Groupon and its rivals fare in 2011? Is this a recession-led fad, driven by cash-strapped consumers desperate for a bargain? Or will the sector spawn a Facebook of the future and revolutionize our buying habits the same way social media has transformed communications?

In their "Top 11 Crucial Consumer Trends for 2011," trendwatching.com says group buying sites are "springing up everywhere," and are "here to stay."

"It brings offline and online together in a very unique way, which banner ads simply don't do. It's definitely opening people's eyes up to the way e-commerce can be transactive," Aitken said.

Group buying websites like ValuUp, and the more familiar bigger brands like Groupon and LivingSocial offer discounts of up to 90% to subscribers depending on how many sign-ups they attract for a given product or service.

Being in one of the world's leading financial centers, getting good deals is "kind of in the nature of people here," Aitken says of Hong Kong.

The challenge for ValuUp in 2011 will be to make the site more "social" Aitken says.

"We're seeing a lot of consumer fatigue. People are used to seeing deals and they don't really share anymore."

Mobile applications could remedy the situation, he thinks, by integrating "local-based tools with real-time deals."

Daniel Latev, manager of non-store retail research at Euromonitor International expects the sector to grow in 2011 saying that even the market leaders like Groupon and LivingSocial are "barely scratching the surface of e-commerce" in some markets.

"Currently these (businesses) have very little penetration. For example, after Groupon's international acquisitions, the site reported to have 13 million subscribers, which is well below the number of online consumers," Latev said.

He also expects the scope of offers available to consumers to expand in the year ahead.

"Currently the majority of the offers are for services such as restaurants, or entertainment and as the scope of products expands the business generated through these will grow," he said.

Another key to success in 2011 will be the "continuing convergence of retail and communication channels," Latev says.

"Consumers do not necessary want to purchase goods through Facebook, but many smaller stores have found their traffic and sales increasing after integrating some social tools such as the Facebook "Like" button," he said.

It's a tactic that a very big store, Walmart put to good use in October last year, when they launched their CrowdSaver app in Facebook which triggered a deal offering 18% off a plasma TV if 5,000 people clicked on the "Like" icon.

According to Walmart it took less than 24 hours for the deal to be activated.

"We expect that sites will also evolve to offer more targeted offers through more sophisticated technology which allows recipients to indicate types of offers they like or don't like," Latev said.

Chicago-based Groupon ended 2010 announcing that it had raised $500 million in financing and will surely be looking to expand its reach abroad in 2011 -- 29 countries and counting.

For ValuUp, the ambitions are more modest for now, but no less challenging as they seek to build on their early success.

They're understandably tight-lipped on the details of their 2011 strategy -- given they already have around 20 competitors in the region -- but Aitken is looking to take the existing model forward while accommodating different demographics and different clients.

"At the end of the day we have to separate ourselves from the larger players -- we don't have the largest database in Hong Kong. But we've got a good niche of quality subscribers that resonate with the type of people that we are trying to offer deals," Aitken said.