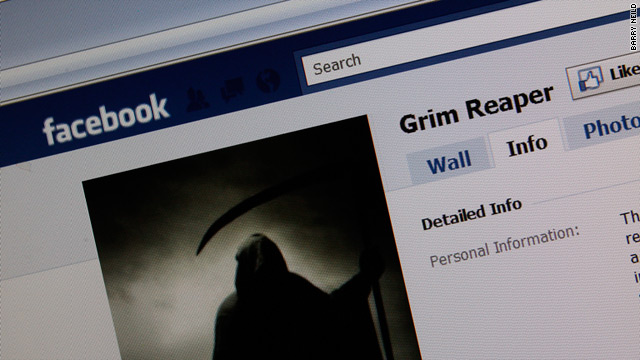 Experts say Internet users are reluctant to face up to their own mortality.
STORY HIGHLIGHTS

(CNN) -- When Jeremy Toeman set up Legacy Locker, an online service to handle people's digital assets when they die, his concept was widely hailed as a brilliant innovation that would become an overnight success story.

He wasn't the only one with the idea. Other tech innovators launched their own businesses to serve a potentially vast market of Internet users who might want to bequeath their e-mail accounts, social network identities, blogs, and other websites when they die.

The new businesses quickly generated a media buzz over the concept of the "digital afterlife," highlighting cases where post-death legal battles had broken out over access to online material left behind.

But far from dealing with a tidal wave of customers, the uptake on these services has been slower than expected, with afterlife websites signing up thousands rather than millions of customers.

"As much as I'm told I'm a genius for doing this, you'd think that if I was we should have millions and millions of customers by now, but we don't," he said, stressing that business was still very good.

If you were to wholesale pass on online effects to the deceased's nearest and dearest, it could expose things that were perhaps best left unexposed.
--Wendy Moncur, technology and human behavior researcher
RELATED TOPICS

At Entrustet, another website that allows customers to appoint a digital executor to oversee the transfer and deletion of the deceased's web accounts, business is also growing at a healthy but modest rate.

Founders Nathan Lustig and Jesse Davis say things are going well, with about 3,000 users (none have died yet) having signed up to their service since it launched last April.

With no over-arching rules governing what happens to our online presence when we pass away, it would seem prudent and logical to sign up to a digital afterlife service.

Failure to implement an online post-death plan could mean things like valuable web addresses, treasured photos and even access to online bank accounts may all be lost for good, experts say.

So why are people being so slow to sign up?

Age is one factor, says Wendy Moncur, a computer technology and human behavior expert at the University of Aberdeen who has been researching the digital afterlife concept.

Moncur says most web-literate people are still some way from death's door, statistically speaking, so are not thinking about their online legacy. But there is also a psychological factor.

"Nobody likes to face up to their death at the best of times," she says.

The founders of Entrustet and Legacy Locker agree their potential customers need to overcome a mental barrier before they take the plunge.

"I'm very happy with our progress, but if I've learned anything about human psychology, it's people don't actually want to face or make decisions about death in any way that they don't have to," said Toeman.

Like Toeman, Lustig is confident that there will be a shift in attitude that will manifest itself in the healthy profits (he jokes that his company's unofficial motto is: "Everybody uses the Internet and everybody dies.")

"People need to make the mental leap from considering online accounts as just the main activities that they do all day online to actually real digital assets," he said.

"I do not know the speed or how long it's going to take for that shift to take place but we'll all see it happen before our eyes."

Moncur also believes that the uncertainties of a nascent market place may be off-putting to some, with regulation needed to eliminate bogus operators, stop companies going bust before their customers die and ultimately govern what can be claimed from the deceased's assets.

"Everyone has something they don't want people to know," she said. "When it was on paper they could hide it away somewhere but online it's a lot more difficult and if you were to wholesale pass on online effects to the deceased's nearest and dearest it could expose things that were perhaps best left unexposed.

"These are not straightforward issues which is why research needs to be done."

Toeman agrees with the idea of regulation, saying it could also help eliminate current problems caused by online operators who insist that all digital assets become their property when the Grim Reaper comes calling.

"We believe strongly that it's not okay to offer a service and have hundreds of millions of people use it and decide that the terms of that service expires at death because the content that is created has value beyond death," he said.

"I think companies are going to do the right thing when it comes down to it, I just think they've even thought about it yet."