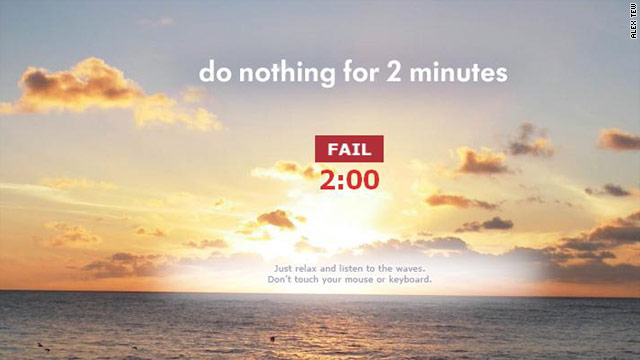 The creator of the ultra-busy "Million Dollar Homepage" offers web users a new challenge: Do nothing for two minutes.
STORY HIGHLIGHTS
RELATED TOPICS

Not long if you're cooking an egg or trying to score a come-from-behind touchdown.

But in the age of live blogging, push notifications and Twitter, it can seem like forever when you're trying not to do anything. Especially when you're staring at a computer screen with your fingers twitching on a mouse.

Soothing those fast-twitch tendencies -- or perhaps just exposing them -- is the point behind "Do Nothing for 2 Minutes."

"Just relax and listen to the waves," it reads. "Don't touch your mouse or keyboard."

An onscreen timer begins counting down from two minutes. If the users try to interact -- and it's surprising how easy it is to do without even thinking about it -- they get a "Fail" message and the timer resets. If you make it to the end ... well, we won't undercut the point of the site. Try it and see.

The page, which caught on over the weekend on blogs and via Twitter, is the brainchild of Alex Tew, mastermind of 2005's "Million Dollar Homepage."

On that site, Tew simply divided the screen into a million pixels then offered to sell them for $1 each. Four months later, the page was a mess of glaringly bright advertisements, and Tew was $1 million richer.

Tew told the folks over at TechCrunch that his new page isn't meant to be a moneymaker, but rather an exercise in chilling out in a fast-twitch digital age.

"I had been thinking how we spend every waking minute of the day with access to an unlimited supply of information, to the point of information overload," he told the blog. "I also read somewhere that there is evidence that our brains are being rewired by the internet, because we get a little dopamine kick every time we check our e-mail or Twitter or Facebook and there's a new update.

"So we're all developing a bit of ADD ... [w]hich is probably not great in terms of being productive."

In a Huffington Post story Monday about the site, more than 22 percent of readers responded to a poll admitting they couldn't make it through the full two minutes on "Do Nothing."

Tew posted a message on Twitter last week saying the average length of time on site was 58 seconds. "C'mon peeps you can do better!" he urged.

Still, as of Monday afternoon, the page had received more than 129,000 "Likes" on Facebook.

Tew said the rise of social media has ratcheted up the speed that information flows on the internet in the past few years.

"If I had done MDH today, I might have made $1m in 4 weeks rather than 4 months," he told TechCrunch.