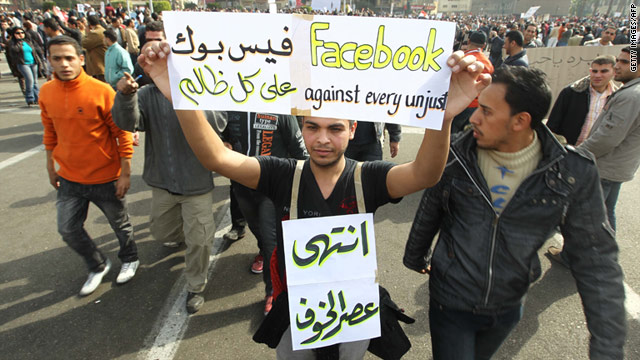 Internet access was returned to parts of Egypt on Wednesday. A protester on Tuesday holds up a sign in support of Facebook.
STORY HIGHLIGHTS
RELATED TOPICS

(CNN) -- After several days of blackout, internet access was restored to parts of Egypt on Wednesday, according to CNN correspondents and internet traffic monitors.

Cell phone networks, which also were cut off amid sometimes violent protests in the Middle Eastern country, were also partially running, according to reports.

"#Alexandria tense as fears of clashes rise; internet back up and running #Egypt," CNN's Nic Robertson wrote on his Twitter feed at 8 a.m. ET.

"Internet blackberry do seem to be working again," CNN's Ben Wedeman posted at about 5 a.m. ET.

CNN confirmed internet service had been returned to Egypt at about 5:30 a.m. ET on Wednesday. Internet monitors Renesys and RIPE also show a spike in Web traffic coming from the country, after several days without a signal.

"Egyptian Internet providers returned to the Internet at 09:29:31 UTC (11:29 a.m. Cairo time). Websites such as the Egyptian Stock Exchange, Commercial International Bank of Egypt, MCDR, and the US Embassy in Cairo, are once again reachable," Renesys, an internet intelligence company, wrote on its official blog.

CNN iReport got a flood of new accounts from Egypt after internet service started to return on Wednesday.

Egypt's embattled government is believed to have cut internet and mobile phone access in an attempt to disperse protests calling for the country's president, Hosni Mubarak, who has been in power for 30 years, to step down.

Mubarak on Tuesday said he would not seek re-election in September. U.S. President Barack Obama urged that the transition should occur quickly.

Demonstrations -- both pro- and anti-Mubarak -- continued on Wednesday.

Egypt's protests initially were organized, at least in part, via Facebook groups. After the internet started to shut down on Thursday, protesters used other means to communicate.

On Monday, Google announced a service that would let people in Egypt and elsewhere post to Twitter by making landline phone calls.

The search company's voice-recognition software translated those calls into text, allowing people outside of Egypt to view the Twitter messages.

The internet situation in Egypt has raised questions about the role of technology in modern protests and also about "kill switches" for a country's internet.

CNET reports the United States is considering giving Obama the power to cut private internet access in the event of disaster.

Some pro-technology groups have condemned the internet shutdown in Egypt.

"The Internet is a global medium that fundamentally supports opportunity, empowerment, knowledge, growth, and freedom and ... these values should never be taken away from individuals," the Internet Society said in a written statement.