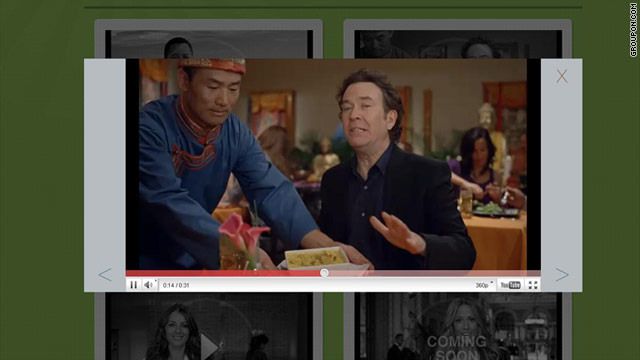 (CNN) -- After taking 24 hours of online flak for a set of cheeky Super Bowl ads that critics say went too far, Groupon founder Andrew Mason has explained, but not apologized, in a blog post.

In three spots that ran before, during and after Sunday's game, commercials that appeared to promote humanitarian and environmental causes -- most notably Chinese government oppression in Tibet -- swerved to become tongue-in-cheek pitches for Groupon deals.

Critics, many of whom took to Facebook and Twitter to complain, said the ads, directed by actor-director Christopher Guest of "This is Spinal Tap" and "Best In Show" fame, made light of serious situations.

"We would never have run these ads if we thought they trivialized the causes -- even if we didn't take them as seriously as we do, what type of company would go out of their way to be so antagonistic?" Mason wrote on Groupon's official blog.

In the Tibet ad, actor Timothy Hutton bemoans the human-rights situation in Tibet before quipping from a Tibetan restaurant, "But they still whip up an amazing fish curry!"

In the two others, actor Cuba Gooding Jr. bemoans the world's dwindling number of whales before talking up a discounted whale-watching cruise and actress Elizabeth Hurley bemoans imperiled Amazon rainforests before promoting a deal on a Brazilian wax (adding that "not all deforestation is bad").

Any backlash against the ads didn't appear to have any immediate impact on the popularity of Groupon's iPhone app, which was the third-most popular free application Tuesday morning in Apple's App Store.

Mason notes that Groupon began as The Point, an activism-based site, and that the Web page for the Groupon ads offers a link to donate to each of the causes that the ads spoof. "We took this approach knowing that, if anything, they would bring more funding and support to the highlighted causes," he wrote.

Groupon is matching the amount its customers donate to the causes, up to $100,000 each.

In a blog post, Greenpeace biologist John Hocevar (who also, coincidentally, founded Students for a Free Tibet), praised the ads.

"Greenpeace is happily participating in the campaign," he wrote. "The truth is that the 'Save the Money' campaign and the commercial are really helping us save the whales."

Mason said that, rather than making fun of charitable causes, the ads were intended to make light of Groupon itself, and advertising in general.

"Our ads highlight the often trivial nature of stuff on Groupon when juxtaposed against bigger world issues ... ," he wrote.

He also took a somewhat defensive potshot at other Super Bowl ads.

"When we think about commercials that offend us, we think of those that glorify antisocial behavior -- like the scores of Super Bowl ads that are built around the crass objectification of women," Mason said. "Unlike those ads, no one walks away from our commercials taking the causes we highlighted less seriously.

"Not a single person watched our ad and concluded that it's cool to kill whales. In fact -- and this is part of the reason we ran them -- they have the opposite effect."

Mason never apologizes directly in the post, but says "the last thing we wanted was to offend our customers."

Based on comments posted on the blog, some Groupon customers were satisfied with the explanation -- but not all.

"I do actually appreciate knowing the backstory here. I agree that the idea isn't exactly horrible, especially as you've laid it out," one reader wrote. "But the finished, as-aired Tibet commercial was horrible. It did trivialize the cause. That you didn't mean to be offensive doesn't mean you weren't."