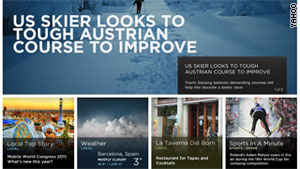 (CNN) -- Looking for new ways to package its growing crop of content, Yahoo is developing an application for the iPad and Android tablets called Livestand.

The magazine-style app, slated for release in the first half of the year, will pull together news and photos from Yahoo's various properties, Blake Irving, Yahoo's product chief, announced Thursday.

News stories from Yahoo's news, sports, finance and gossip sections will be organized in Livestand. The app will also include volunteer submissions from the Yahoo-owned Flickr photo sharing service and the Contributor Network, which publishes how-to articles.

What content is shown will depend on the user's specified topic interests, location and the time of day that they're using the app.

Livestand is an important product for Yahoo, say people who work with the company. The internet giant is looking to cultivate and promote a homegrown project rather than acquiring a hot startup, as it's done often in the past.

But the iPad has no shortage of news publications.

Last month, AOL posted a teaser for an app it's working on called Editions, which will cater content to each reader's interests and will surely bolster AOL's own inflating number of blogs.

Having acquired the Huffington Post for $315 million, AOL has not been bashful about its mission to revive its online-content business by focusing on producing its own news and video.

"We've been pretty public about it -- that our turnaround strategy is hinged on content," AOL Media President David Eun told CNN in November. "So across the company, we are betting on content."

Similarly, Yahoo made a big investment in news last year when the company expanded its network of blogs producing original stories. AOL has reportedly expressed interest in hitching itself to Yahoo in a merger.

Several startups have bested the two aging Web wizards with apps that have been gaining traction in tandem with the rise of Apple's iPad.

News aggregators Flipboard, Pulse and Reeder have all generated buzz and downloads. And last week, News Corp. launched The Daily, a news periodical distributed exclusively on the iPad. Many news outlets, including CNN, also have popular iPad apps.