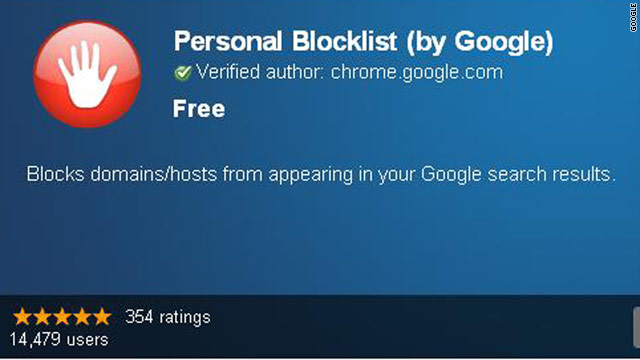 (CNN) -- Content farms, those generators of spammy Web pages engineered to show up high in search results, are getting a closer look from Google -- a move that could dampen their visibility.

In a post on Google's official blog, the search giant on Monday invited users of its Chrome Web browser to take part in a test of an extension that will let them block certain sites from their search results.

Adding the extension will let users create a "personal blocklist." They won't see content from that site again in Google searches done while using Chrome.

It also sends Google a list of all the sites users have blocked.

"[W]e will study the resulting feedback and explore using it as a potential ranking signal for our search results," Google principal engineer Matt Cutts says in the post.

The tool comes as Google and others in the search industry are ramping up the rhetoric against content farms.

In another post last month, he said Google has tweaked its algorithms to try to minimize those sites and that more changes are on the way.

"[W]e hear the feedback from the web loud and clear: people are asking for even stronger action on content farms and sites that consist primarily of spammy or low-quality content ...," he wrote.. "The fact is that we're not perfect, and combined with users' skyrocketing expectations of Google, these imperfections get magnified in perception. However, we can and should do better."

A new search engine, Blekko, is designed specifically to weed out content from the farms.

"These sites are the worst spam publishers on the Web according to our users," Rich Skrenta, CEO of Blekko, said in a February 1 release listing top Content Farms. "They are literally responsible for millions of pages on the Web that our users say are just not helpful and they'd prefer they were banned permanently. So we're going to do that for them."

Generally speaking, the sites pay writers small wages to create posts on topics that have been identified as frequently-searched. The posts are then optimized to show up high in search results and used to sell ads.

A Wired magazine article described a videographer who cranked out 10 videos on kayaking for Demand Media in less than four hours. He said he earned $20 for each.