Apple in talks to improve sound quality of music downloads 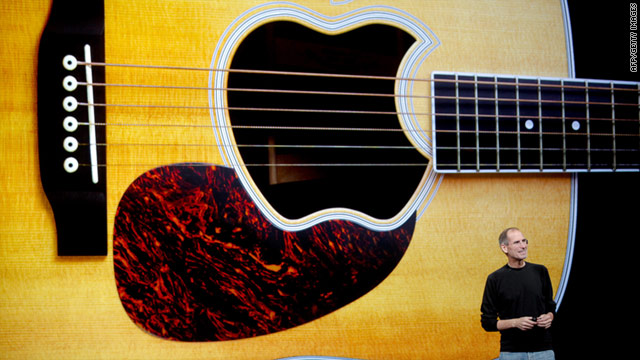 Apple is an industry leader in sales of both paid digital music and portable players.
STORY HIGHLIGHTS
RELATED TOPICS

San Francisco (CNN) -- Apple and other digital music retailers are in discussions with record labels to improve the quality of the song files they sell, executives involved in the talks say.

As a result, online music stores could eventually offer songs that sound truer to their original recordings, perhaps at a premium price.

Professional music producers generally capture studio recordings in a 24-bit, high-fidelity audio format. Before the originals, or "masters" in industry parlance, are pressed onto CDs or distributed to digital sellers like Apple's iTunes, they're downgraded to 16-bit files.

From there, the audio can be compressed further in order to minimize the time the music will take to download or to allow it to be streamed on-the-fly over the internet.

Why don't record labels at least give retailers the option of working from higher-grade recordings?

"Why?" Jimmy Iovine, a longtime music executive, asked rhetorically. "I don't know. It's not because they're geniuses."

Iovine, in addition to being the chairman of Universal Music Group's Interscope-Geffen-A&M record label, has a venture with hip hop artist Dr. Dre called Beats Audio. The company designs high-end headphones and other audio equipment.

Work from Beats Audio will be included in the upcoming TouchPad tablet computer from Hewlett-Packard. HP has sold 1 million laptops with Beats Audio technology.

Iovine briefly discussed the topic of improving the caliber of music offered by download services onstage during a two-hour HP news conference unveiling the TouchPad and other products.

"We've gone back now at Universal, and we're changing our pipes to 24 bit. And Apple has been great," Iovine said. "We're working with them and other digital services -- download services -- to change to 24 bit. And some of their electronic devices are going to be changed as well. So we have a long road ahead of us."

A new high-end smartphone, called the Pre 3, was also announced at HP's event. But the device only has mono speakers, according to technical specifications provided by HP.

Many models of Mac computers can play 24-bit sound, and the iTunes program is capable of handling such files. But most portable electronics, and many computers, don't support 24-bit audio.

To make the jump to higher-quality music attractive for Apple, the Cupertino, California, company would have to retool future versions of iPods and iPhones so they can play higher-quality files.

"Paul McCartney can master The Beatles albums all he wants, (but) when you play them through a Dell computer, it sounds like you're playing them through a portable television," Iovine said.

Apple secured rights to begin selling The Beatles catalog in November as the exclusive digital retailer.

Apple has upgraded the quality of its music catalog once before. In January 2009, the iTunes Store began offering most tracks in a bit-rate twice as high as its previous standard and free of copy-protection. Apple had piloted the program two years prior with music giant EMI.

ITunes controls about 66% of the paid digital-download market. Amazon MP3 trails with 13%, according to research from the NPD Group.

Apple and Amazon declined to comment for this story. Representatives for the big four record companies didn't respond to requests for comment.

eMusic, a smaller digital retailer, is investigating whether customers would be willing to pay for higher-quality downloads, Adam Klein, the company's CEO, said in a statement.

The eMusic website recently began selling albums from major labels, including the Universal Music Group, which Iovine is negotiating on behalf of. Universal and eMusic executives have met regularly "to discuss future initiatives," Klein said.

The advent of streaming

Shawn Layden, Sony Network's chief operating officer, said most people don't care, or even notice, if their music is flawed. That is a common sentiment among industry watchers.

"The challenges of music right now -- I don't think the primary one is a quality issue," he said. "Music lovers worldwide are mostly keen right now on the convenience of access -- make it easier for me to have."

The Qriocity service streams music at 48 kilobits per second, Layden said. Current downloads from iTunes are more than five times higher in bit-rate quality. But Qriocity uses the latest methods of compression so the music still sounds good, he said.

Regardless, offering premium-quality downloads could help a la carte retailers like iTunes hold on to valuable high-volume music fanatics. Otherwise, those customers could gravitate to the growing number of services -- like Sony's, Napster and others -- that offer millions of streaming tracks for the monthly price of a single album.

The initiative could also serve as a sparkplug for digital music sales in general. Worldwide revenue from paid downloads is flattening, as sales of physical CDs -- another 16-bit format -- continue to sink, according to a report by the International Federation of the Phonographic Industry.

Some notable music acts have broken from labels to handle their own distribution and have found a sound business in selling primo music files, usually to their most diehard fans.

Renowned rock band Radiohead began selling digital versions of its new album on its website Friday. For $9, fans can download MP3 files in a higher bit-rate than what iTunes would offer, and for $14, they can get the uncompressed audio. A Radiohead representative didn't respond to a question about preliminary sales.

Nine Inch Nails front man Trent Reznor released figures in 2008 for a record he produced by rapper Saul Williams. Back then, about 87% chose either the highest quality MP3 or the uncompressed format, the data shows. Reznor's bands now usually offer high-fidelity versions of their own songs.

For musicians who pore over every aural detail, the digital age can be frustrating.

"Most of you aren't hearing it the way it's supposed to sound," Dr. Dre said in a Beats Audio promotional video. "And you should -- hear it the way I do."

At the HP event, Iovine summed up his mission and the purpose of this industry initiative.

"What we're trying to do here is fix the degradation of music that the digital revolution has caused," he said. "It's one thing to have music stolen through the ease of digital processing. But it's another thing to destroy the quality of it. And that's what's happening on a massive scale."