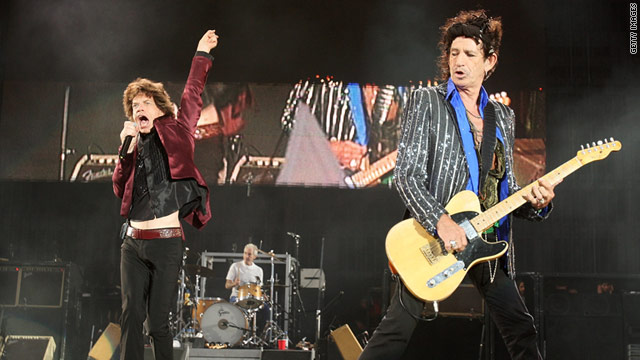 The Rolling Stones, one of the biggest rock bands of all time, is selling its early albums in high-quality versions online.
STORY HIGHLIGHTS
RELATED TOPICS

(CNN) -- Lovers of high-fidelity audio are about to get some satisfaction.

The Rolling Stones plan to sell high-quality downloads of their first 27 records for the first time online.

The premiere batch of five went on sale Tuesday for $20 or $30 each depending on sound quality. The rest will debut on the first of each month until September, said representatives for ABKCO Music & Records, which owns the rights to the band's early recordings, and its retail partner.

To sell the high-definition digital music, ABKCO has saddled up with HDtracks, a small online retailer that specializes in primo-quality albums. The agreement isn't exclusive, but the deal was natural because HDtracks is one of the few websites that currently targets the "audiophile" niche.

Professional music producers generally capture studio recordings in a 24-bit, high-fidelity audio format. But before the originals are pressed onto CDs or distributed to digital sellers like Apple's iTunes, they're downgraded to 16-bit files, which audiophiles say don't sound as good.

HDtracks may have some competition from the paid-download giants soon, however. Apple and other Web retailers are in talks with major labels about offering high-quality songs, music executives said.

ABKCO has also been talking to the top music sellers about high-def music, starting as early as three years ago, said Jody Klein, the record company's CEO since the death of his father Allen in 2009. Early on, "We went to the digital providers, and they couldn't handle it at the time," he said.

HDtracks already has a deal in place with the Universal Music Group, the biggest of the four majors. The Rolling Stones signed with Universal in 2008 after a long stint with EMI Music, though the band's new label hasn't listed any Rolling Stones music on HDtracks.

Universal periodically sends HDtracks some of its artists' albums on hard drives or over secure internet connections, said David Chesky, co-founder of the three-year-old music website. The site has some 5,400 albums and 100,000 customers, with classic rock, classical and jazz being hot genres, spokespeople said.

HDtracks customers will need to make room on their own hard drives because each 24-bit album takes up about 2 gigabytes of computer storage, which is the size of a high-definition film on iTunes.

"If you're cooking and jogging and all that, then MP3s are cool," Chesky said. "HDtracks is not for people who want to swap little files and all that. They're big files."

"It's going to bring you as close to the artist as you can get," he added. "You're going to hear the artist breathing."

ABKCO tested the waters with a stable of Sam Cooke records that were made available on HDtracks last month. "Our artists make the records, and our job is to deliver them the way that the band heard them when they first cut them," Klein said.

Fans may have some expectations about how the Rolling Stones tracks will sound. The HDtracks releases are based on remasters that were pressed on Super Audio CDs between 2002 and 2004. These CDs are no longer being made, but ABKCO is considering producing another batch, Klein said.

The Rolling Stones are the biggest act to offer most of their catalog on HDtracks. The band was the fifth highest-grossing touring group last decade, according to a report from concert research firm Pollstar, and have sold more than 200 million albums worldwide.

But the Rolling Stones aren't the only group from the '60s British Invasion that's graced the store's catalog. Paul McCartney started selling an uncompressed version of "Band on the Run" on HDtracks last year, and Ringo Starr also sells albums there.

The Beatles' remastered catalog was sold first on CDs and then exclusively on iTunes. High-quality versions of those albums are only available on apple-shaped USB drives sold by EMI and Apple Corps., the band's homegrown label.

Like those Beatles songs, HDtracks files generally require special software to play and cannot be transferred to a portable music player without first downgrading the sound and reducing the size of the file.