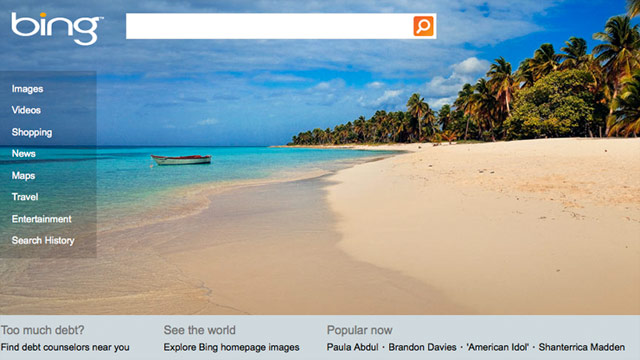 (Fast Company) -- Microsoft has dialed up its competition in the search-engine wars with the introduction of a daily deals facility on Bing.

Microsoft knows daily deals are the hottest meme at the moment, so its announcement is suitably cheeky and aggressively street-hawkeresque (we kid): "Calling all bargain hunters, deal lovers, Groupon groupies and Living Social fanatics! Things just got easier" it trumpets, making no bones about mentioning the biggest name in daily deals right now, Groupon, to gin up interest in its service.

Bing Deals arrived Thursday on desktop PCs and smartphones (where it's possibly most useful) via Bing's dedicated, simpler, mobile site m.bing.com. It promises to give access to "more than 20,000 unique offers in over 14,000 cities and towns across the U.S."

But how has Microsoft managed to amass such a diverse coverage and ad-partnership pool already, you may wonder?

The answer is that Bing, unlike Google's more head-on direct competitor efforts, is actually assembling daily deal offers from sites like Groupon, Living Social, Restaurant.com "to name a few" into one location, making it easy to work out where you can find a super-cheap purchase, or perhaps a spontaneous birthday gift for someone.

It's using technology from The Dealmap ("a leading source for people to find and share the best local deals") to power its systems, which means as well as location-based deal discovery, you'll also be able to share results with people via email.

It seems the system is spread throughout Bing, as well -- if you search for a local restaurant using Bing, then the engine will "make sure you know" about any deals that establishment may have available by listing them directly beneath the business details in the search window.

The system appears ideal for consumers previously uninterested in deals sites like Groupon -- which may offset the slight brand erosion each of these individual sites may suffer as their deal offers are wrapped into Bing's front-end UI.

In launching daily deals, Bing is stepping up its competition with Google and jumping aboard the (already bursting) daily deals bandwagon.

With new data suggesting total revenues from daily deals services could reach as much as $6 billion by 2015 in the U.S. alone, this is a fast-growing market segment that Microsoft simply can't ignore.

So how can Microsoft grab a share of this if it's just gathering together everyone else's deals? By selling ads to you when you surf to its pages.