How to wipe Charlie Sheen off the Web 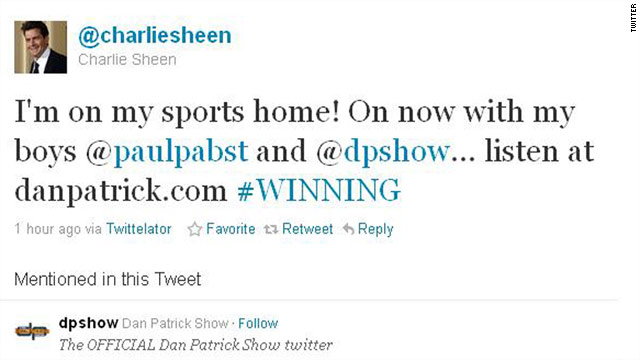 Twitter is just one of the places on the Web where Charlie Sheen has been everpresent. A browser extension can end it all.
STORY HIGHLIGHTS

Now you can wipe Hollywood's favorite out-of-control warlock from the internet ... or at least your version of it.

Tinted Sheen is an extension for the Firefox and Chrome browsers that will blot out Sheen's name anywhere it appears.

Sheen's high-profile flameout over the past couple of week has been hard to avoid. He's popped up on interview shows, podcasts, TMZ and, seemingly, any other venue that would have him.

He even took to Twitter, where he almost instantly rocketed to the micro-blogging site's elite -- breaking the record for thefastest rise to 1 million followers and turning #winning into a constantly trending topic.

It's all been enough to make some people say, well, "enough." (You know, like "Two and a Half Men" did).

"Everything is so much better with this app," one user wrote on the extension's website.

"Is there a TV version of this coming out?" wrote another.

Sheen isn't the first overexposed celeb to get the blackout treatment.

The extension comes from the same folks at F.A.T. (Free Art & Technology) who brought us a Justin Bieber blocker.

On a more personal front, Mashable staffer and our own "netiquette" contributor Brenna Ehrlich reminds us about "Ex Blocker," which lets you black out the name of anyone, presumably an ex, from your browsing.

Do you plan to block Charlie? And who else needs to be scrubbed from the pages of the Web? Let us know in the comments below.