Rebecca Black's 'Friday' -- the good, bad and ugly of a viral Web 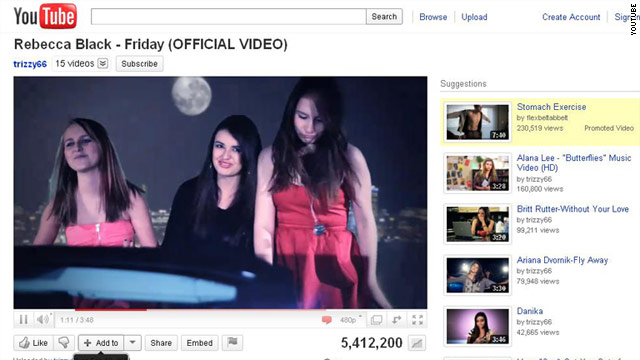 (CNN) -- On Friday, teen pop singer Rebecca Black was a little-known artist on an independent label.

A weekend later, her song, "Friday," is an internet sensation -- largely for all the wrong reasons.

On one hand, it's a glance at how art (and, yes, maybe that's a tenuous term in this case) that might have languished in obscurity a decade ago can literally become world-famous overnight.

On the other, it showcases the willingness of a mostly anonymous Web population to savage the fledgling efforts of a 13-year-old girl for sport.

On Friday, the song's YouTube video, which was posted February 10, had a few thousand views.

On Tuesday, it was pushing 6 million.

Her name was a top trending topic on Twitter for two days running, and opinion-makers from "American Idol" host Ryan Seacrest to Billboard magazine spread the word. And, in almost all cases, the word wasn't good.

News sites were asking if it's the worst song ever. Billboard called the song "straight out of Auto-Tuned hell." Rolling Stone called it an "unintentional parody of modern pop."

The tune comes from Ark Music Factory, a production house that Billboard says holds casting calls for singers and flies them to Los Angeles to record. Its website features a host of other teen and tween female "exclusive artists" with similar songs.

The song, for what it's worth, is the sort of lightweight bubblegum fluff that one might expect from an aspiring teen (barely) pop artist. It's simplistic, heavily (and we mean heavily) auto-tuned, and features lyrics that can be called repetitive at best, asinine at worst.

"Yesterday was Thursday/today is Friday./We're so excited ... . We gonna have a ball today./Tomorrow is Saturday and Sunday comes afterwards/I don't want this weekend to end."

And then there's the video, which features a rap break from a rapper who appears about 20 years older than everyone else in the video and drops borderline-creepy lines about getting "in the back seat" and wanting to scream when he sees a school bus drive by.

You've read the caveats -- watch the YouTube video if you wish.

As all viral videos do, it has inspired a host of spoofs and parodies. (Personal favorite: "Bob Dylan" reworks the tune).

And while there were some positive comments on the video, they're far outnumbered by digital disses.

"no. bad. not cool. not good music. please, are her 15 minutes of fame over yet?" wrote one user.

"Congratulations Rebecca Black, you just beat out Sirius 'a curtain killed me' Black as the most pathetic person with that surname," the account owner wrote, referencing another "Potter" character.

Others were far more personal and far nastier. Some of the response videos posted on YouTube were profanity-laced tirades taking shots at not only the song, but Black herself.

All that directed at a girl who, according to her page on Ark's website, is a "fun, loving 13-year-old" in eighth grade who's proud of her lead role in her school's production of "Oklahoma!"

By Tuesday, some Web users were pushing back.

And on her Web page:

"I know you are probably really scared and stressed out and uncomfortable with what has happened in the last few days, but I assure you that all of us absolutely love you," one commenter wrote. "You should take your newfound fame and roll with it.

"Even people making jokes about your video can't get it out of their head and already know all of the lyrics. You've made a lot of people really happy..."

Gossip blogger Perez Hilton slammed the song as "HIGHlariously bad," but added that she "looks like a sweet girl" and shouldn't "let the bad reviews get to you too much!"

And, in the all-publicity-is-good-publicity world of show business, who's to say all the flak the video has taken will be a bad thing for the young singer.

"Say what you will about the downfall of modern music, but Rebecca's rocket-trajectory proves that at the very least, labels are finally catching on to this whole Internet thing,"Drew Grant wrote Tuesday for Salon. "Even if people crap all over 'Friday,' it's still become a major sensation in under five days, with a reach that would have been impossible for much better acts that were limited to radio play."