Why cloud storage is the future of music 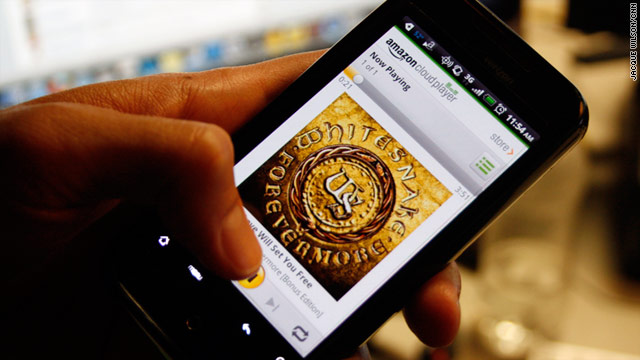 (CNN) -- Amazon this week became the first big internet company to offer something called "cloud music." To the unfamiliar, that term may seem off-putting, like a new soft-rock genre that leans heavily on harp solos. But it's possible many of us will be using cloud music systems in the not-far-off future.

In marketing-speak, the cloud is just a fancy term for all the computers -- other than your own -- that are connected to the internet.

Companies like Amazon and Google maintain huge networks of computers that are stored, row after row, in secret warehouses all over the world. These machines hold data that computer users don't want to store on their own hard drives.

Think about all the photos you have on Facebook; any documents you've stored with a service like Dropbox or Mozy; or all of your Web-based e-mail. Those files are stored somewhere out in the cloud instead of on a personal laptop.

The cloud-storage concept is catching on in lots of ways, but music, as buzz about Amazon's new service shows, seems to be the next frontier in this cloud expansion.

Still, this transition is fraught with legal and technical challenges. It's also been a long time coming, which gives ammo to skeptics who say cloud music has been the "next big thing" for years now.

Here's a quick breakdown of the topic. Think of it as Cloud Music 101.

Today, most digital music options, like Apple's iTunes system, force users to store their music on their own hard drives. Some audiophiles amass music collections that take up tens or hundreds of gigabytes of storage space, which slows their computers down. If that drive crashes, the music is gone.

Plus, that music is stuck in one place. You can sync iTunes music, to keep that example going, with Apple's portable devices. But you have to connect your iPhone or iPod to the computer in order to do so. You can't access that music easily from other computers; and it's difficult to store it on multiple devices.

In a consumer-centric world, music lovers could put all of their music files in the cloud and then access them from anywhere.

"Our customers have told us they don't want to download music to their work computers or phones because they find it hard to move music around to different devices. Now, whether at work, home, or on the go, customers can buy music from Amazon MP3, store it in the cloud and play it anywhere."

What are the drawbacks?

If all of your music is in the cloud, you need an internet connection to access it. This is particularly troublesome on mobile devices, since fast Wi-Fi connections aren't ubiquitous and cellular data connections are already getting jammed.

Amazon's Android app does let users download music from the cloud to their mobile devices, however, which lets users listen to their music offline.

Amazon's Cloud Drive is the first example of a big tech company jumping into this space. The service lets people upload music files into the cloud and then play songs through an internet browser or an Android app.

The service currently doesn't work on the iPhone.

Users get the first 5 gigabytes of storage for free. There's a fee for more storage.

How are the Cloud Drive reviews?

Mostly positive. Here's a bit from the Silicon Alley Insider:

"We spent some time with it this morning, and despite some missing features, the service is an amazing value and pretty easy to use."

The blog adds: "It's true that you can link Dropbox to iTunes for syncing and streaming music on the go, but that takes a lot of work. Amazon's service is much more user friendly."

CNET recommends the service, although that tech site says it wishes the Amazon cloud worked better with non-music files:

"For music fans, Amazon's Cloud Drive and Cloud Player get an unqualified thumbs-up from us. The price is right, the interface is simple, and if you're already a fan of Amazon and its MP3 store, then it's a slam dunk."

There are a few smaller companies with cloud music services, too.

Among them: Grooveshark, mSpot and MP3tunes.

Then there are, of course, a host of music streaming services like Pandora that offer an online radio experience but don't let users upload their files.

What else is coming?

Google and Apple are rumored to be working on cloud music services. Both reportedly have been held up because of music licensing issues.

What challenges does cloud music face?

"The music industry's objections include the possibility that users might store illegal, or pirated, material and that cloud storage offers easy access to collections of friends," writes the New York Post.

Technology Review offers more details on these issues: "Record companies have been disturbed by services that allow users to download the same piece of music multiple times, and have maintained that streaming requires a separate license distinct from offering tracks for sale."

Sony says it's "keeping all of our legal options open," according to Reuters.

How does Amazon respond?

The company says the cloud is just like a personal hard drive.

"The functionality of saving MP3s to Cloud Drive is the same as if a customer were to save their music to an external hard drive or even iTunes," Amazon told Ars Technica, which is a CNN Tech partner site.

Have more questions? Leave them in the comments section.