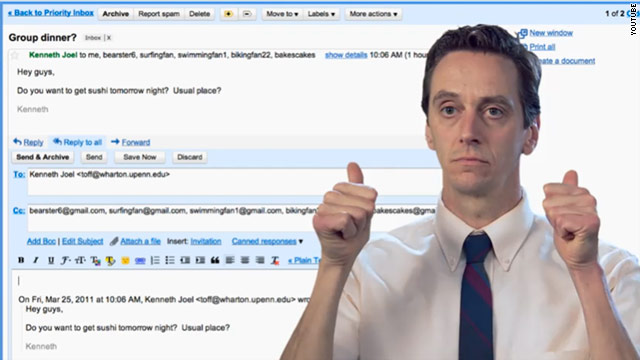 (CNN) -- Search giant Google on Friday debuted a "motion-controlled" e-mail system that lets users write digital messages by moving their bodies instead of typing on keyboards, which Google says are "outdated" and "inefficient."

"To open a message make a movement as if you were opening an envelope. To reply, simply point backward with your thumb," the company says in a video demonstration of the product, which seems to be a riff on Microsoft's Kinect gaming system. "To reply all, use both hands. To send a message, lick a stamp and place it down."

In case you haven't noticed, it's April 1, the day many corners of the internet start to look a lot like TheOnion.com.

Google, always the king of digital April Fools' jokes, played several pranks on the hopefully knowing public on Friday morning. Among them: motion-controlled e-mail, a YouTube roundup of viral videos from 1911 and a statement that says Google soon will change all of its fonts to the much-reviled Comic Sans.

People who search for "Comic Sans" on Google from certain browsers (Safari doesn't work, as far as we can tell) will see all their fonts changed to this bubbly typeface, which makes everything look like a ransom note written in crayon.

Google, of course, wasn't the only company to play some online tricks Friday. Here are a few of our other favorites:

HuffPo paywall: Mocking The New York Times' decision to start charging its frequent readers for access to its online articles, The Huffington Post on Friday announced a paywall of its own -- one that affects only employees of the Times.

"It's an important step that we hope you will see as an investment in The Huffington Post, one that will strengthen our ability to provide high-quality journalism to readers around the world -- and especially to our readers inside The New York Times," the company writes in a joke statement.

Royal wedding blog: Nearly a month before the scheduled nuptials, The Guardian on Friday unveiled a mock "live blog" to provide minute-by-minute updates on the wedding of Prince William and Kate Middleton. And they had a little fun with us, too.

"10.24 a.m.: More media news: our US correspondent Ed Pilkington reports that CNN will be sending 632 correspondents and commentators to cover the wedding, with the coverage on the day being helmed by Piers Morgan, sitting on a giant throne suspended from the upper level of Tower Bridge."

Angry Nerds: Software maker Atlassian served up a riff on the popular mobile game "Angry Birds" with this tablet-based "game," which lets players sling bespeckled geeks across the screen by launching them out of an office chair.

"What do you do when you have bugs in your code?" the site says. "Send in the Angry Nerds. Consider these issues ... resolved."

Job as Autocompleter: Another one from Google. The company mocks its own auto-complete feature, which guesses what users are searching for before they finish typing in a query. From the fake job posting:

"As a Google Autocompleter, you'll be expected to successfully guess a user's intention as he or she starts typing instantly. In a fraction of a second, you'll need to type in your prediction that will be added to the list of suggestions given by Google. Don't worry, after a few million predictions you'll grow the required reflexes."

Know Hemingway? You know that LinkedIn box that always recommends you connect with annoying former co-workers? On Friday, it's recommending dead famous people instead. Dear Ernest Hemingway, "I'd like to add you to my professional network."

Deals 4 Hipsters: If you're sick of those obnoxiously hip Groupon deals, check out the mock site Deals 4 Hipsters, which steals Groupon's format but offers discounts that are a little too trendy for their own good.

Cobra documentary: Who doesn't love the Bronx Zoo cobra -- the venomous snake that went missing this week, tweeted up a storm and was captured Thursday? Animal Planet fake-announced it's making a special behind-the-scenes documentary about the snake's adventures while on the loose.

"Featuring never-before-seen footage, this renegade cobra's home movies and personal disclosures about why she slipped town will offer the real story behind the cobra's escape and solo adventures through New York City," the site says. "The documentary will also highlight the cobra's meteoric rise to fame and her interactions with the city's elite including Mayor (Michael) Bloomberg."

Apple 'Friend Bar': At The Onion, where April Fools' Day is just another Friday, there's a hilarious spoof on Apple's Genius Bar. They call it the Friend Bar, and it's a place where "specially trained" employees will listen to you talk about how much you love arcane Apple features for as long as you can rant:

"Unlike your girlfriend or your co-workers, we're not going to get tired of discussing the wireless networking capabilities of Snow Leopard Operating System. We're here and we're ready to listen," one of the fake workers says in a video segment about the new feature.

Playmobil Apple Store Playset: Feeling some iPad 2 line withdrawal? ThinkGeek offers a parody playset that lets you re-enact the fun of waiting in an Apple Store line with the help of plastic figurines.

"A quick peek at the miniature Genius Bar and we were feeling a bit woozy. Then we saw the tiny Steve Jobs presenting in the Keynote Theater on the top floor and that was it. Our wallets popped out faster than you can say Jonathan Ive and we plunked down whatever money was needed to own this amazing playset."