Google to finance $100 million worth of original programs for YouTube 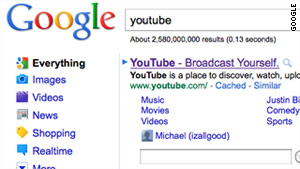 Now, instead of 500 channels and nothing on, there will be 5 million channels, and something on.
STORY HIGHLIGHTS
RELATED TOPICS

(Mashable) -- Google plans to create 20 special channels on its YouTube site, and will spend $100 million to create original programming to populate them, according to sources who talked with the Wall Street Journal.

Like Netflix announced last month, Google wants to create its own streaming video programs, however, according to the WSJ sources, the company will create low-cost programming designed specifically for the web and YouTube, and support the shows with advertising.

The sources said this will be a "major overhaul" to YouTube, which already has a lucrative advertising system in place.

It was unclear when Google would begin spending the money to create the new programs, but the source said that Google has visited top Hollywood talent agencies in search of ideas, and will probably end up making deals with production companies and directors to produce the content.

Good move, Google. The direction broadcast television is taking is beginning to look obvious, where web-connected screens are finding their way into the living room and home theater in ever-increasing numbers.

In addition to a plethora of set top boxes, many new TV sets are equipped with Internet connections, and Google's own Google TV hardware is starting to make sense in light of this latest initiative.

With original content produced specifically for the web inserted into the battle for viewers, it's going to be more difficult for cable TV, broadcast and satellite TV to dominate television broadcasting as they still do.

It might be cats playing the piano -- now dressed up in tuxedos because of their expanded budget -- but it will be something. And that something is just the beginning.