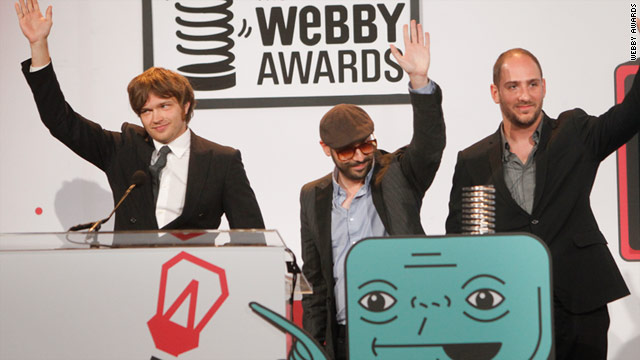 The band OK Go received the 2010 Webby Award for film and video. This year's winners will be announced May 3.
STORY HIGHLIGHTS
RELATED TOPICS

All are among the dozens of internet presences up for Webby Awards in 2011.

The Webbys announced its list of nominees on Tuesday.

"The wildly eclectic mix of nominees reflects how the internet has become the driving force shaping everything from entertainment to business," the group that runs the awards said in a written press release.

The Webby winners will be announced May 3 and an awards ceremony -- which will feature its patented five word acceptance speeches -- will be on June 13.

Some classics include winners Al Gore ("Please don't recount this vote"), the crew behind "The Beatles: Rock Band" website (A Webby! Yeah, yeah, yeah!") and comedian Zach Galifinakis ("How am I on time? S---!").

See a video highlighting some of the 2011 Webby Awards nominees.

The public also will be able to vote online for The Webby People's Voice Awards. Deadline for voting is April 29.

This year's nominees reflect the rise in mobile apps, particularly tablet computers like the iPad, Samsung Galaxy and Motorola Xoom.

Viral video is well represented, with nominations for the viral"Bed Intruder" video, OK Go's "This Too Shall Pass" video featuring an elaborate Rube Goldberg Machine and the Old Spice live-response campaign.

Forget Rebecca Black's "Friday" -- here are some viral songs we like.

As always, quite a list of celebrities were nominated for their Web work. Zach Galiafinakis, Conan O'Brien, Bob Dylan, Ralph Macchio and Isabella Rossellini are among those on the list.

Tween heartthrob Justin Bieber got a nomination for his irreverent spoof "takeover" of comedy site Funny or Die.

Now in their 15th year, the Webby Awards are the internet's most venerable set of honors for websites, online music and videos, mobile technology and interactive advertising.

In the interest of shameless self-promotion ... er ... full disclosure, CNN was nominated in several Webby categories.

The interactive feature"Walk Around the World" was nominated in the Online Film and Video category and CNN Podcasts (including ... ahem ... the Tech Check podcast) were included for Web/Radio/Podcasts.

CNN Mobile, the war-casualty "Home and Away" series and CNNMoney also received nods.