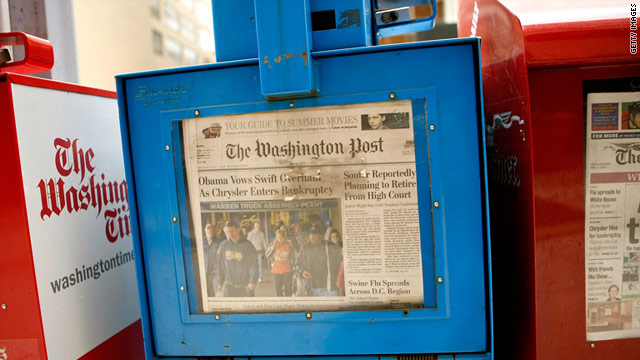 (CNN) -- Tech and media companies are in a race to sap the serendipity from news consumption and distill readers' interests into an algorithm.

This week was full of headlines about new entries into the personalized-news market -- sites that customize their offerings based on what types of stories a user seems to like.

An update to Google News on Thursday brought "automatic personalization" to that article-aggregation site. When you're logged into a Google account with the Web History feature enabled, the News home page will transform itself based on the news you've clicked on in the past.

Also on Thursday, Betaworks, the New York tech incubator that's home to Bit.ly, launched News.me, in partnership with the New York Times. The iPad application and e-mail newsletter aggregate news based on what's most popular among people the user follows on Twitter.

The Washington Post kicked off this week's customized-news frenzy with the debut of Trove on Wednesday. Instead of News.me's tablet app polling Twitter, Trove features iPhone, Android and BlackBerry apps that look for news on Facebook. An iPad version is coming soon, Post CEO Donald Graham says.

With excitement in the media industry around mobile apps and Google's success with algorithms that constantly refine themselves, personalized news has become a hot topic.

Flipboard, which makes a pretty magazine-like news aggregator for the iPad, has ridden a wave of hype and media partnerships. The Oprah Winfrey Network, for one, is on board.

Flipboard Co-founder Mike McCue, who also has a seat on Twitter's board of directors, said last week that the company had raised $50 million, valuing his company at $200 million. Competitors called Zite, on the iPad, and XYDO, on the Web, are also finding fans.

Meanwhile, Digg, a pioneer in this automatic algorithm-based news sector, is trying to reinvent itself. It's under new management after recently changing direction toward personalized news rather than what's most popular overall.

Americans are spending more time gobbling up news bits on most platforms than they were a decade ago, according to a September report from the Pew Research Center.

Whether they want computers studying their reading habits and forming assumptions about what articles they might like is another question.

"Power users," the people who spend the most time consuming news, prefer to have a larger selection and more control over the types of articles they see, according to a recent study by researchers at the Pennsylvania State University. This could pose a major challenge to technology companies that rely on early adopters to fine-tune and spread the word about their products.