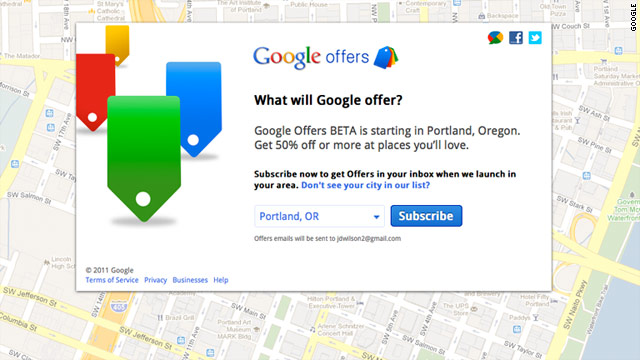 Google has the advantage of already having both millions of users and advertisers.
STORY HIGHLIGHTS
RELATED TOPICS

Yes, it's YADDS (Yet Another Daily Deal Site), but Google has the advantage of already having both millions of users and advertisers.

Google reportedly tried to buy Groupon for $6 billion in December, only to be rebuffed.

Groupon, based in Chicago, exploded in popularity in the recession, likely becoming the fastest-ever billion-dollar corporation. After spawning dozens of copycat sites, Groupon is now looking to IPO.

The beta of Google Offers is launching in Portland, and a splash screen prompting users to sign up began showing up Thursday.

"Today we launched a marketing campaign inviting Portlanders to sign up for a test of Google Offers -- to get great deals delivered right to their inboxes," a company spokeswoman said by e-mail. "Offers is part of an ongoing effort at Google to make new services that give consumers great deals while helping connect businesses with customers in new ways."

Businesses interested in testing Google Offers can fill out a form to join the beta.