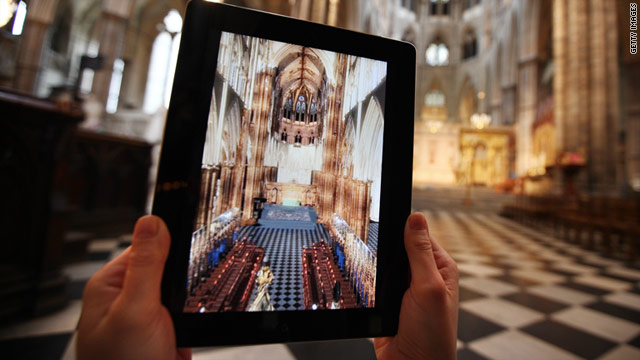 A 3-D mobile app for Apple and Android devices is a guide to Westminster Abbey, where Friday's royal wedding will be held.
STORY HIGHLIGHTS
RELATED TOPICS

(CNN) -- Friday's nuptials between Prince William and Kate Middleton won't be the first royal wedding to captivate Anglophiles from around the world. But it will be the first with its own Twitter hashtag.

The wedding's full-bore digital presence -- from live-streaming video to mobile apps -- casts a light on a royal family that, for the past century, has needed to, sometimes reluctantly, stay on the cutting edge of communications technology.

There were even plans to broadcast Friday's wedding in 3D, although they were eventually scrapped due to a perceived lack of interest and access.

"The Royal Family has embraced social media in its own time, which is typical of how a basically conservative institution has learned to adapt," said Charlie Beckett, director of a journalism and society think tank at the London School of Economics.

That adapting has taken multiple forms over the years for a family that's increasingly had to justify its relevance, and the money British taxpayers fork over to help maintain their lavish lifestyle.

"The success of the royal family over the last 100 years is that they have always adapted very quickly to an ever-changing society," said Mark Saunders, a royal biographer and contributor to CNN's royal wedding coverage.

"You only have to look at 'The King's Speech,' the movie, to see how technology has been vital to the Windsors' PR efforts," he said. "They adapted to radio, then TV ... and now the internet."

The Academy Award-winning movie tells the story of Britain's King George VI, who overcomes a persistent stammer to deliver an inspiring 1939 radio address when England declared war on Germany.

His father, King George V, gave the first royal Christmas address on radio in 1932, overcoming concerns about the largely untested medium of radio. As depicted in "The King's Speech," it was George V who drilled into his son the public-relations importance of being a radio presence.

It was George VI's daughter, Queen Elizabeth II, who embraced the TV age. In an unprecedented move, the new queen allowed a BBC crew into Windsor Castle in 1969 to film "Royal Family," a yearlong documentary meant to introduce the royals to their subjects.

"It was amazing," said Fred Goodland, a royal archivist, in a BBC segment looking back on the series. "This was the first time we'd seen them talking to one another rather than addressing us."

For its time, it was a far cry from the historical and pop-culture images of royals past.

"The idea of the royal family was always that they were the family on the hill that lived in the big castle," Saunders said. "Though they set an example, they never opened their doors."

The monarchy got its own website in 1997, although it was a mostly perfunctory affair that seemed to say, "We hear everyone's supposed to have a web page, so here it is."

That changed in 2009, when Elizabeth and family had the site overhauled, an event that earned its own Buckingham Palace launch party.

The reinvigorated, and fairly exhaustive, site now includes features spanning from virtual tours and slideshows of the royal residences to a feature on official gifts the queen has received from foreign dignitaries (Two black beavers? Check. A box of snail shells? Check. Cowboy boots? Check.)

But there's one aspect of the Facebook Age the royals haven't embraced: the two-way dialogue it can facilitate.

Many celebrities use Twitter and other online venues as a way to communicate, even debate, directly with fans and detractors (look no further than CNN's own high-profile Brit, Piers Morgan, and his frequent bouts of argy-bargy on the micro-blogging site).

In some ways, that one-way firehose of information is a perfect fit for the monarchy. Particularly in the 1990s (and more markedly since the 1997 death of Princess Diana, which her sons reportedly still blame on the paparazzi involved in her car crash) the Windsors have had a testy relationship with the media.

But today's digital media lets the royal family bypass the traditional means of spreading information. These days, instead of offering up an interview, a Windsor spokesperson will merely alert the press to pay attention to Twitter or YouTube at a certain time, journalists covering the royals say.

This royal embrace of what London's Guardian called an arsenal of social-networking tools is a strategy the family hopes will spur even greater interest in Friday's wedding -- and also control the way the event, and its participants, are perceived.

Observers expect the family's embrace of the internet to continue, if not ramp up, in the years to come.

The evolution of the crown's journey into cyberspace, Saunders said, is one that probably will sound familiar: The younger generation of royal Brits were the early adopters, and the older folks followed.

"We are seeing Twitter and Facebook and YouTube as a direct result of William and Harry and the way they were brought up," said Saunders, whose books include "Prince Harry: The Biography" in 2002. "They were brought up by a thoroughly modern mother, and a father that was dragged into the modern.

"They were the first royal children of the new media age."