Will the royal wedding break the Internet? 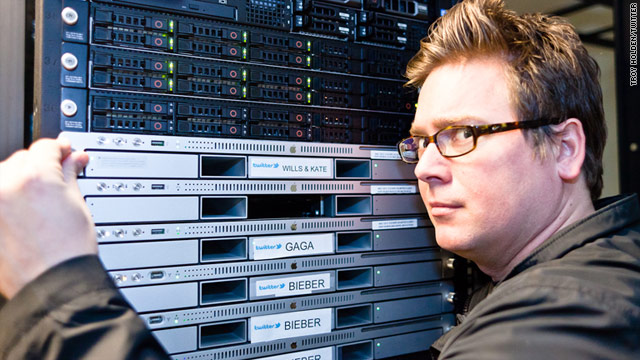 Tune in to CNN for live coverage of the royal wedding with hosts Piers Morgan, Anderson Cooper, Kiran Chetry and Cat Deeley. It starts at 4 a.m. ET Friday on CNN, CNN.com and CNN Mobile.

(CNN) -- When Kate Middleton and Prince William kiss on the balcony of Buckingham Palace on Friday afternoon, all bloody hell could break loose online.

Twitter feeds will be buzzing. Photos will be uploading. Websites will be serving up live streams of the royals.

It's possible that all this over-the-pond hullabaloo could shut down major websites, stall wireless networks and, generally, grind the digital chatter to a pace that would frustrate even the commonest of commoners.

But that's just a guess. It's pretty difficult to predict what exactly will happen to the Internet's pipes when the British royal wedding takes place, said Liz Bradley, a spokeswoman for Akamai, an Internet service company that also monitors online traffic.

It's possible major websites will crash because of a traffic influx, she said, but the fact that the wedding starts at 6 a.m. ET means that quite a few people in the United States will wake up to watch it after it's already happened.

That may lessen the burden on the Internet, she said.

Also throw in the fact that many people won't be at their desks during the wedding since it's a national holiday in the United Kingdom and many in the United States will be asleep. Most of the big, Web-crashing events tend to occur during working hours when people are stuck at their desks and can't watch TV.

"We find a lot of times our highest times are when people are at work at their computers and going online," she said. "More and more, we're seeing people go on their computers while they're watching TV, so that's probably also going to happen -- but it might not be as much" as if people were at work.

Still, "my guess is it's going to be a very high traffic day," she said.

Jason Damata, a spokesman for Trendrr, which tracks social-media traffic, said the wedding will be a big TV event but that people will talk about it online, too.

"Certainly there is anticipation, and I bet it's going to be off the charts," he said. "In terms of two-screen behavior (watching on TV and chatting about it on a mobile device such as a smartphone), it will be pretty epic."

Big news, sporting and cultural events have been known to crash websites in the past. When pop icon Michael Jackson died in June 2009, Google News and Twitter both had trouble staying online.

Twitter's "fail whale," a cartoon that accompanies an error message saying Twitter has been overloaded with too many people trying to post to the site at once, has made appearances during other big events, including the World Cup, which was the biggest Web event to date by traffic.

(For statisticians, the World Cup match on June 24, 2010, which occurred at the same time as the longest Wimbledon tennis match of all time, actually was the biggest Web event, Akamai said. More than 10 million links were clicked per minute during that online double-whammy, topping other sporting events, the U.S. midterm elections and violence in Egypt.)

Twitter posted a photo online poking fun at the idea that the company would buy up extra computer space to prep for the royal wedding. The social network did not, in fact, add server space, but the company has been beefing up its infrastructure in an effort to survive these kinds of events, said spokesman Matt Graves. That makes the site less likely to crash now than if this event had taken place in 2010 (thanks for waiting, Wills).

"Essentially we reworked the way Twitter operated," Graves said. "We rebuilt the underpinnings of the site, and we vastly expanded the infrastrure."

The highest-traffic moment in Twitter history occurred four seconds after midnight on New Year's in Japan. At that moment, 6,939 tweets were posted per second.

Graves woudln't say whether he thinks the royal wedding will approach that mark.

"We try not to speculate until stuff happens," he said.

Google and YouTube are running the official royal wedding website, which will stream the event live online, so many eyes will be looking to those tech giants to keep the Internet up and running.

Wireless networks tend to crash when thousands of people, all in one location, try to place calls or upload data simultaneously. Wireless service was spotty at President Barack Obama's 2009 inauguration in Washington as hundreds of thousands of people tried to share the moment via their phones.

The Wall Street Journal reports mobile phone companies in Britain are adding extra cell towers in hopes people will be able to send photos from the site of the royal wedding in London, which is expected to draw 1 million people.

"Everything Everywhere, another major U.K. mobile provider, has also been upgrading its network. All will have on-the-ground teams to tweak capacity as the day unfolds. Vodafone has at least doubled its capacity in areas of central London."

We'll have to wait until Friday to see if it all works.