Will + Kate = sixth-biggest Web event ever 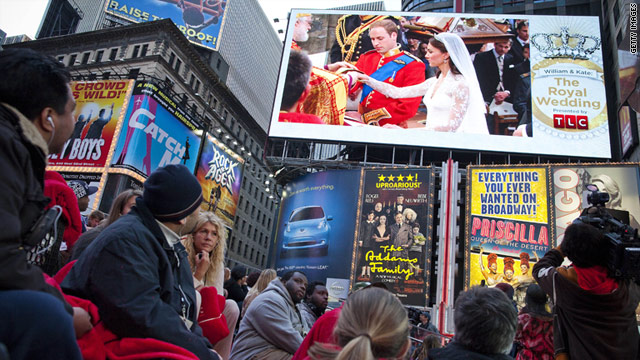 People watched the royal wedding online as well as on TV, making it the 6th biggest Internet news event ever.
STORY HIGHLIGHTS

(CNN) -- A record number of people may have watched live video of the royal wedding online.

But the Friday wedding of Prince William and Catherine Middleton failed to make the top five Web news events of all time -- being topped by various sporting events and the 2010 U.S. midterm elections.

Global Internet traffic on news-focused websites peaked at 5.3 million page views per minute at about 8:30 a.m. ET on Friday, according to Akamai, an Internet service provider and traffic monitor.

That makes the wedding the sixth biggest event in Internet history.

Figures are expressed in page views per minute, at the peak of readership

The top event remains a World Cup soccer match and the longest Wimbledon tennis match, which happened at the same time in June 2010. More than 10.3 million people per minute clicked on news stories about those sporting events.

Will and Kate did beat out President Obama's election in November 2008, which got 4.3 million page views per minute, Akamai says.

Of course, fewer people in general went to the Internet for news two years ago than do now, which makes these kinds of comparisons a bit tricky, said Jeff Young, a spokesman for Akamai.

"Technology has come a long way since then," Young said.

The royals did better when it comes to live video.

The company Livestream, which provides live video services to the Associated Press, Entertainment Tonight, CBS and others, tells CNN partner site Mashable that it broke its all-time record for simultaneous live streams.

Akamai says it's difficult to compare live streaming events to each other, but that preliminary data suggests more people watched online video of the royal wedding simultaneously than any other event the company has provided live video services for.

"Each year we are seeing more people consume video online at events of this nature, but it's very hard obviously to do that apples to apples comparison," Young said. How widely an event is syndicated greatly affects how many people will end up seeing it on the Internet, he said.

The interest in the royal wedding online does show how the Internet is changing the way people look for and consume information, he said.

"This is an example of just how important the Internet and connected devices have become to how people experience something like this," he said. "It wasn't the fact that people were at the office in front of their computers -- and yet still a huge number of folks have gone online to experience this event.

"That shows where we've moved as a society."

Most websites appeared to perform well during the royal nuptials, but there were a few mishaps. The BBC's online video feed of the wedding reportedly crashed "at the moment that Kate Middleton arrived at Westminster Abbey," according to the news site The Drum.

"We are experiencing some technical issues with BBC Online due to the sheer weight of traffic which may cause the site to be slower than normal in some cases," the company said in an online statement.

Twitter, which has had trouble surviving big news events in the past, appeared to be working normally on Friday morning. So did Google News.