Five things Microsoft may do with Skype 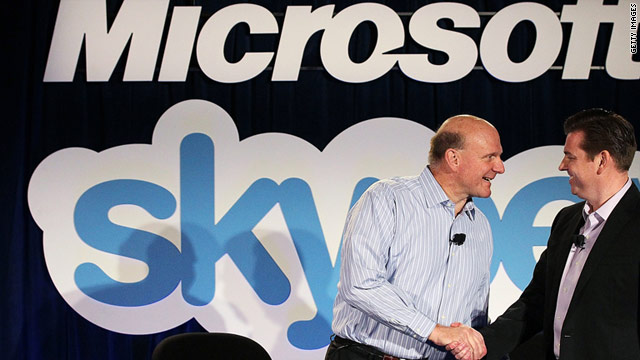 (CNN) -- Tuesday's announcement that Microsoft is buying Skype is obviously huge business news, but millions of consumers aren't focused on that.

Instead, many of the video and chat Web tool's 660 million users are wondering less about the economic impact of the $8.5 billion deal and more on what the purchase will mean for their user experience.

The millions who don't use Skype but have Microsoft computers, phones and video game systems will no doubt see some changes, too.

None of which is to say that the immediate reaction on the Web was all that exciting.

For all its global reach, staid veteran Microsoft just doesn't get people jazzed up like, say, Apple or Google. (That despite the company's mini-resurgence on the gaming front and its well-received Bing search engine.)

Tuesday on Twitter, some folks were quick to take potshots at the deal.

"The 1st details MS will announce about their plans for Skype will be integration with Kin phones, Connectix webcams, & WebTV," one follower of New York Times tech writer David Pogue wrote after he announced the deal. Those are all failed Microsoft products.

"I guess we can look forward to Skype 2011 in a few years," said another commenter, taking aim at Microsoft's image as a slow-moving old-Web company.

But there are some avenues Microsoft could take with Skype that some folks might not immediately recognize.

Based in part on comments that Microsoft CEO Steve Ballmer made Tuesday, here are five of the leading scenarios of what the computing giant might do with Skype:

1. Integrate it with the Xbox

It seems like a no-brainer that Microsoft would integrate Skype's advanced chat technologies with that, as well as with its Xbox LIVE service.

The Xbox 360 already has a chat function. But gamers have largely been unimpressed, opting for other consoles like the PlayStation for multiplayer games that require real-time communication.

Similarly, Skype already has TV-compatible webcams and software, but it's hardly been a high-profile feature.

Putting Skype on the Xbox could push both products forward.

The Windows Phone 7 system really hasn't had an answer for the iPhone's FaceTime app or Google Talk's newly added video. Now it will, with the best-in-breed video and voice chat app at its disposal.

"It's pretty obvious today that not everyone is doing video, particularly from their phone," Ballmer said. "That's an opportunity where there are a lot of things that could be done."

Of course, Apple and Android products can already run Skype apps. So it will be interesting to see how that plays out. (Ballmer assured current Skype customers that those platforms will still be supported.)

"Given that Skype has been in use for more than a half-dozen years and has a growing user base, it would be difficult for Microsoft to begin eliminating Skype support for other mobile platforms," Kevin C. Tofel wrote for tech blog GigaOM.

"But future features and other value-add services could be offered exclusively or first on Windows Phone 7 devices going forward, giving consumers a 'killer app' to consider when making a smartphone purchase."

3. Show up at your office meeting

One of the reasons Microsoft was considered to be high on Skype was so Google and Cisco Systems, both rumored to be interested, wouldn't get their hands on it.

In terms of workplace communication, the latter may be more important than the former. Cisco is the first name people think of when office video conferencing and teleconferencing are mentioned.

But Microsoft has made inroads with its Lync system, and adding Skype's software would move it one step further.

Oh yeah ... and it just so happens that Skype CEO Tony Bates is a former Cisco executive, as are other members of the Skype team.

Microsoft's Office 365, which will include an online-only option, is expected to be released later this year. The suite of workplace tools will include Lync.

Yes, Facebook was rumored to be one of the tech titans in the running to buy Skype. The social media giant's interest seems a clear indication that Mark Zuckerberg and Co. would like to beef up Facebook Chat with video.

It was just a passing reference. But on Tuesday, Ballmer mentioned "social" as one of the possible uses for a Microsoft-owned Skype.

Microsoft actually owns a piece of Facebook, having bought in for $240 million in 2007. And the two have worked together on projects since then. (Skype now also lets users integrate their news feeds and friends lists.)

Getting a product in front of Facebook's 600 million or so users would be huge.

5. Bring some juice back to Hotmail

By virtue of its ties to Microsoft, Hotmail still has tons of users worldwide. But do you know anybody who's excited about it?

For the past year or two, Microsoft has been punching up Hotmail, an e-mail service that has lost considerable cool points in the wake of Gmail's rise.

If Microsoft managed to seamlessly integrate Skype-quality video chat into Hotmail, it would definitely turn some heads.