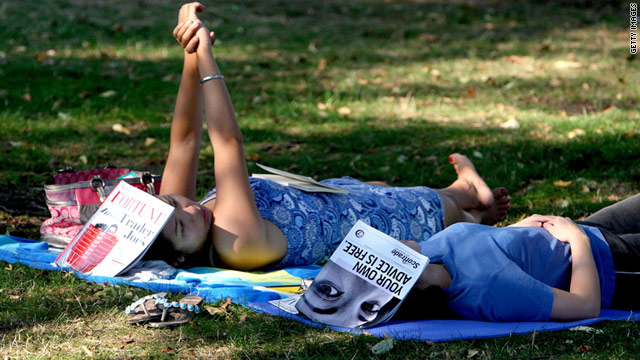 Amazon on Friday released its Top 20 "most well-read" U.S. cities, and Cambridge, Mass., home of Harvard and Massachusetts Institute of Technology (MIT), came out on top.

For the list, Amazon compiled its sales data for books, magazines and newspapers -- both in print and for its Kindle e-reader -- dating back to Jan 1. Then, they used population figures to find out which cities bought them the most, per capita.

College towns dominated the top 5 (to be expected, perhaps, because the list not only considers where people are heavy readers, but where they opt to buy books online as opposed to at more traditional stores).

Joining Cambridge in the top 5 were Berkeley, California, Ann Arbor, Michigan, and Boulder, Colorado, along with Alexandria, Virginia, a suburb of Washington D.C.

Beach books also may have been a factor. Florida was the only state with three cities on the list: Miami, Orlando and University of Florida's home, Gainesville.

"We hope book lovers across the country enjoy this fun look at where the most voracious readers reside, and that everyone gets the chance to relax with some great summer reads," Mari Malcolm, a managing editor at Amazon, said in a news release.

The list also gave a look at what types of books are most popular in various cities.

Cambridge was tops for non-fiction books. Boulder lived up to its reputation as a foodie town, ordering the most in Amazon's Cooking, Food & Wine category. Alexandria ordered the most children's books.