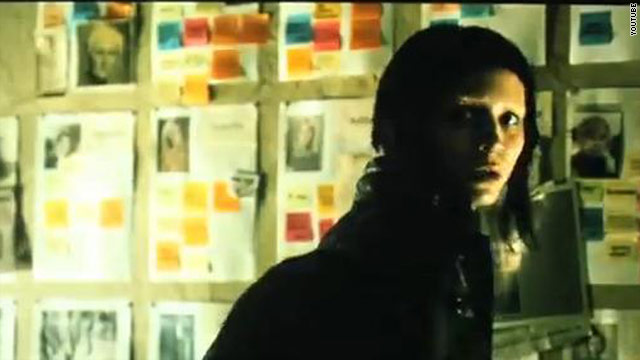 Rooney Mara, who stars as Lisbeth Salander in "The Girl with the Dragon Tattoo," appears in an apparently leaked trailer.
STORY HIGHLIGHTS
RELATED TOPICS

(CNN) -- What appears to be a leaked amateur recording of a trailer for the hotly anticipated English-language "The Girl with the Dragon Tattoo" movie is making the rounds on the Web.

Buzz around the clip, which appears to have been recorded with a handheld camera, has pushed the upcoming film's title to the top of Google's list of popular searches. But there's plenty of reason to speculate that the "leak" could be a viral marketing ploy by the film's creators.

A shaky video camera captures what appears to be a fast-paced teaser, featuring stars Daniel Craig and Rooney Mara and a pounding version of Led Zeppelin's "Immigrant Song" recorded by Trent Reznor and Karen O of the Yeah Yeah Yeahs for the film.

Nearly 700,000 people had watched the YouTube trailer by Monday morning, a number that will surely keep climbing when most U.S. workers return to their cubicles Tuesday.

It was uploaded on an account with the name "dobvlvstiuwir" that was created Saturday and features no other content. In the bio, the account claims to be run by a 36-year-old in the Netherlands.

While the leak and trailer have an unsanctioned feel, there are several factors that raise questions about whether the shaky-cam clip may be a piece of guerrilla marketing from Sony Films for the movie, which is set for a December release. (The trailer calls the film, which explores murder, rape and other dark subject matter, "The feel bad movie of Christmas.")

• The video quality is pretty solid for what purports to be a camcorder creation, and the sound quality is even better. The camera work appears self-consciously shaky at first but then steadies somewhat as the trailer goes on.

• It starts with a "red band" Motion Picture Association of America rating, despite supposedly being posted by someone from the Netherlands.

• And the seemingly unauthorized leak is something that the movie's title character, computer hacker Lisbeth Salander, might do.

See Lisbeth and the rest of our "Top 10 Movie Techies"

Sony Films has not commented on the trailer and did not immediately respond to an e-mail Monday. The studio also, significantly, has not had the trailer taken down.

"The Girl with the Dragon Tattoo," directed by David Fincher, is to be the first of three Hollywood films based on Swedish author Stieg Larsson's best-selling thriller trilogy. The U.S. version follows a trio of Swedish-made films released in 2009 and 2010.