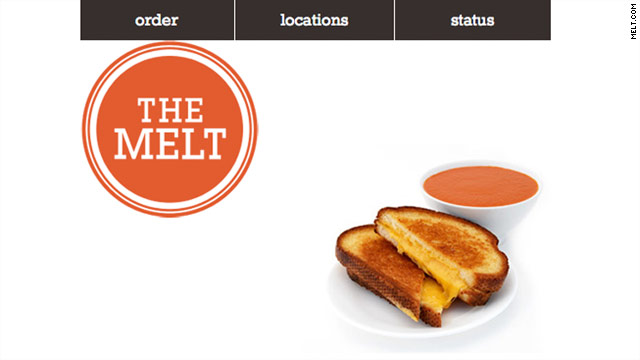 Back-end software ensures that you get a piping hot grilled cheese in your hands within 60 seconds of checking in.
STORY HIGHLIGHTS
RELATED TOPICS

(Mashable) -- What would you do after Cisco killed your beloved product? For Jonathan Kaplan, the inventor of the Flip video camera, the answer was simple: start a venture-backed nationwide chain of grilled cheese sandwich joints.

That may sound like Kaplan has lost his marbles, but bear with us.

Kaplan's genius, as shown in the highly popular Flip, is creating super-easy, mass-produced technology. With his new business, The Melt, he's done that twice over.

Buy a grilled cheese on your smartphone, and you get a QR code to swipe in store when you arrive. The back-end software ensures that you get a piping hot grilled cheese in your hands within 60 seconds of checking in.

Kaplan has also invested a lot of effort on making his grilled cheese hardware easy and effective.

He tapped European appliance giant Electrolux to create a brand-new grill with a built-in microwave. It nukes the cheese for 15 seconds, then toasts the bread for another 30 seconds.

We can confirm that the resulting sandwiches, doing the rounds here at the D9 conference, were uniformly tasty.

Win or lose, you can't deny that Kaplan has put a lot of thought into this scheme. He found a breadmaker in Chicago whose bread was kneaded in such a way that it created air bubbles for the cheese to fill.

Evidently, his backers at Sequoia Capital agreed. Kaplan won't say how much funding he received, but he plans to start more than 500 Melt locations in the next four years. Each store will cost between $500,000 and $1 million. You do the math.

Famed VC Michael Moritz is sitting on the board, as is Apple retail head Ron Johnson, and the first handful of stores will open in San Francisco in August.

Another reason the whole Melt concept might work out better than expected? One word: calories. Put a grilled cheese sandwich and a cup of soup next to just about any other fast food option, and it's going to look like a plate of greens.

Chipotle may be able to offer you online ordering (and Chipotle, by the way, is a $9 billion business), but good luck working off the 500-odd extra calories a burrito is going to give you compared to the Melt's offerings.

Are you buying it? Is America ready for high-tech grilled cheese? Let us know in the comments.