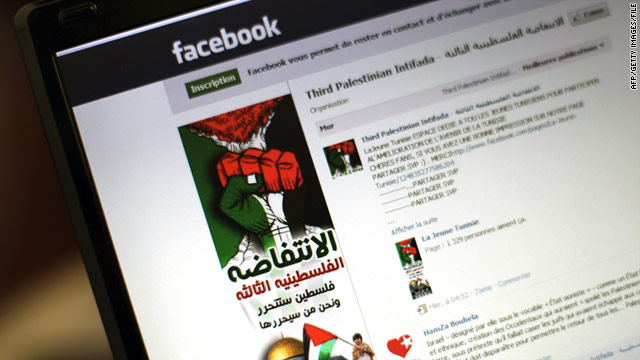 A "3rd Palestinian Intifada" Facebook page was removed a month ago after an Israeli government campaign.
STORY HIGHLIGHTS

(CNN) -- Israel on Thursday applauded Apple's decision to remove an application called the "The 3rd Intifada" from its popular App Store for iPads and iPhones.

Apple removed the application Wednesday, stating that it "violates the developer guidelines by being offensive to large groups of people."

"By its action, Apple has proven, as Facebook did, that it shares the values that oppose violence, incitement and terrorism," Public Diplomacy and Diaspora Affairs Minister Yuli Edelstein said.

Earlier this week, Edelstein wrote a letter to Apple voicing concern about the content of the application.

By its action, Apple has proven, as Facebook did, that it shares the values that oppose violence, incitement and terrorism.
--Public Diplomacy and Diaspora Affairs Minister Yuli Edelstein.
RELATED TOPICS

"Upon review of the stories, articles and photos published by means of the application, one can easily see that this is in fact anti-Israel and anti-Zionist. Furthermore, as is implied by its name, the application calls for an uprising against the state of Israel," he wrote.

The letter asked the company to cancel the application, which allowed users to comment and post photos and stories about protests opposing Israel and Israeli policies.

That letter came on the heels of a successful Israeli government campaign to remove a Facebook page of the same name a month ago. That page was set up in early March by a group of unidentified activists who called for a third intifada to start on May 15, a date known by Palestinians as the Nakba, or catastrophe, which commemorates the displacement of hundred of thousands of Palestinians from their homes in warfare surrounding the establishment of Israel in 1948.

The word intifada -- which translates as "shaking off" -- is popularly used to describe a revolt or rebellion. Palestinians have staged two intifadas, which began in 1987 and 2000 respectively, and claimed the lives of thousands of Palestinians and Israelis.

The page's removal followed heavy criticism from the Israeli government and pro-Israel organizations that Facebook was ignoring its own terms-of-service guidelines, which prohibit the posting of content that is "hateful, threatening, or... incites violence."

Edelstein said at the time that the removal of the page showed that "Facebook management understood that the page is a blunt abuse of freedom of speech to incite to violent actions."