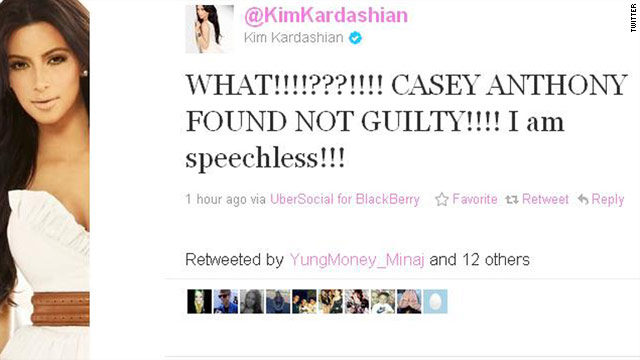 (CNN) -- To say that social media got a little worked up over the Casey Anthony verdict would be like saying Facebook "has a few users" or Twitter "is home to an occasional misspelling."

From the instant word came that Anthony was found not guilty of murdering her 2-year-old daughter, online networking sites were flooded with a cascade of amateur commentary. Most condemned the verdict -- "no justice for Caylee" was a common comment -- which comes after years of the case serving as fodder for cable news, tabloids and the like.

Yes, some folks noted how the popular TV crime procedural would have rendered a more satisfying conclusion. Others cited "Law Abiding Citizen," the movie starring Gerard Butler and Jamie Foxx, for a line spoken by Foxx's attorney character: "It's not what you know. It's what you can prove in court."

Within minutes of the verdict, Facebook pages devoted to Casey and Caylee Anthony filled up with hundreds of comments, most of them expressing outrage and wishing Casey Anthony, who was convicted on four misdemeanor counts, a miserable existence in this life or the next.

Then there was the snack-cake situation.

On their Twitter feed, the Entenmann's baked-goods company jumped on the trending-topic hashtag "#notguilty" to post this -- "Who's #notguilty about eating all the tasty treats they want?"

While it might not seem all that offensive in comparison to much of what was flying around the Web on Tuesday, some folks complained the post was insensitive and Entenmann's quickly pulled it down.

"Sorry everyone, we weren't trying to reference the trial in our tweet! We should have checked the trending hashtag first," the company wrote.

And here's a special tweet from the "Redefining Irony" category: @KimKardashian WHAT!!!!???!!!! CASEY ANTHONY FOUND NOT GUILTY!!!! I am speechless!!!

Kim Kardashian's father, Robert, was a prominent Los Angeles attorney who was previously best known for representing his friend, O.J. Simpson, at his 1995 murder trial.

After wading through the waves of social media reaction, here are some of our favorites from Twitter on the Anthony ordeal, grouped into categories for your convenience:

@poniewozik Not buying Casey/OJ trial comparisons. In shock sure, maybe in ratings; not nearly the same kind of cultural story, tho.

@LauraD People scream for justice - and yet don't support aid or social systems for the two year olds in similar situations who are still alive...

@rodmartucci The judicial system is based on the concept that is better to free the guilty than to condemn the innocent. #caseyanthonyverdict

@JohnDeVore "Not guilty? This is the worst episode of Law & Order ever."

@tracyswartz coming soon to orlando: the casey anthony rollercoaster. but don't worry kids, everyone gets off!

@GiseleNoel Minutes after the #caseyanthonyverdict is handed down, eHarmony notifies Casey Anthony of her soul mate Robert Blake. #perfectmatch

@kenwheaton Is there a support group for people who don't give a rat's ass about the Casey Anthony trial? Sign me up.

@MsVivicaFox My heart is ripped apart! How dare those idiots on that Jury not see the truth? That b---- killed her kid! Who the hell killed Caylee then?

@Kristine_Brite The only comfort is thinking that Caylee is laughing and playing with all the angel babies. #caseyanthony