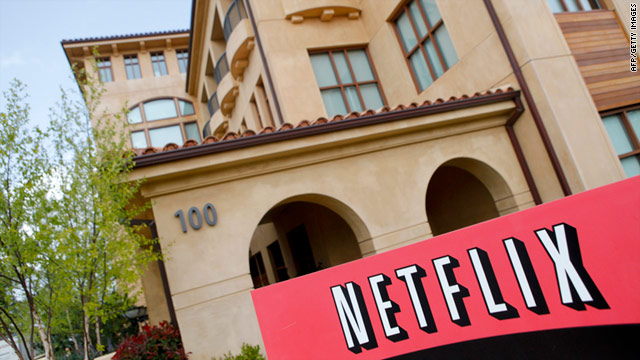 Netflix has been barraged with thousands of messages from angry customers over its price hikes.
STORY HIGHLIGHTS

(CNN) -- If Netflix had filed Tuesday's price-hike news in a movie genre, it would be either drama or horror.

U.S. customers of the DVD-by-mail and Web-streaming service are storming the Internet to protest Netflix's plan to increase the prices of its most popular packages.

"The changes you guys have made in the last 4-6 months have turned me from a serious Netflix Geek into considering cancellation. It's a damn shame," wrote a customer named Justin Block, one of almost 6,000 commenters on Netflix's blog.

Netflix's Facebook page attracted more than 28,000 comments as of Wednesday morning, most of them critical of the move. And thousands of consumers were voicing complaints under #DearNetflix on Twitter.

Netflix has adjusted its offerings, separating physical disc mailings from Internet video. DVD-only subscriptions start at $7.99 per month, the same price as a streaming-only plan. But a monthly plan that combines physical DVDs with Web streaming costs almost $16 -- a 60% price increase.

For prospective customers, the new pricing structure went into effect on Tuesday. For current subscribers, the rates will change on September 1.

Netflix, which did not respond to a request for comment, outlined the adjustment in a company blog post. In the message, a spokeswoman was very upbeat, describing each plan as "a terrific value."

"The only way that this is terrific for the customer is if you plan to offer your entire collection available for streaming," wrote Scotty Fagaly, a self-described longtime customer whose comment was "liked" more than 4,800 times. "Otherwise, this is just yet another way to choke more change out of your customers."

Time.com: Here are some Netflix alternatives

In Canada, Netflix offers only the streaming service, not the DVD mailings.

However, the streaming program's convenience and ubiquity is sometimes overshadowed by its dearth of quality movies available for streaming, relative to those contained in Netflix's extensive DVD catalog.

"I realize Netflix cannot stream what the studios do not allow, but this is a disparity that really should be acknowledged in the price scheme," wrote Travis McClain, a decade-long Netflix subscriber who felt compelled to express his frustrations on the company's website.

Rivals Hulu, Amazon Instant Video and other online subscription programs have failed to match the size of Netflix's catalog.

However, Netflix can't fall asleep on the couch. The cost to license from Hollywood is likely to increase substantially as deals expire and Netflix gains more influence on the studios' businesses, analysts say.

As a workaround, Netflix plans to ink exclusive licensing deals with high-profile producers, Netflix CEO Reed Hastings said at a technology conference last month. For starters, the company will broadcast "House of Cards," a show starring Kevin Spacey and directed by David Fincher, maker of "Fight Club" and "The Social Network."

Media executives have not been bashful in their recent panning of Netflix.

In this case, Netflix is likely in search of additional revenue to offset the growing bandwidth and infrastructure costs, analysts say.

Until now, customers have been getting streaming services at a bargain, said Robert Levitan, the CEO of Pando Networks, a firm that provides streaming software to gaming companies and previously to NBC Universal.

"Consumers have an unlimited appetite for consuming streaming right now," Levitan said. "We all tend to think, as consumers, that we just click 'play,' and it comes down. We don't realize the physical and financial costs of serving that data."

Among many consumers, Netflix is beloved. The company has ranked No. 1 for customer satisfaction in four consecutive years, according to surveys by market research firm ForeSee Results. But Amazon.com, which recently launched its own video-streaming service, narrowly edged Netflix in the most recent annual survey.

Some bloggers offered a broader contextual perspective on the price changes.

"The machines are still featuring people whining about Netflix's fee hike. Meh," wrote Alexis Madrigal of The Atlantic on Google+. "Look at the price of a car. Or college. Or a gallon of gasoline. Or lunch at Applebee's. Or a movie ticket. People don't calculate hourly entertainment value very well."