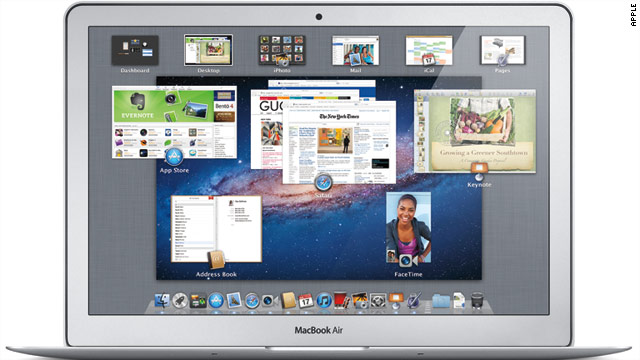 (CNN) -- Lion, the latest version of Apple's operating software for its Mac computers, was released to the public on Wednesday. It's an update that continues to blur the line between software on mobile devices and desktop computers.

With multi-touch gesturing, full-screen app display and access to the Mac App Store built directly into the software, the system was clearly designed to make working on a Mac more similar to working on an iPad.

"Lion is the best version of OS X yet, and we're thrilled that users around the world can download it starting today," said Philip Schiller, Apple's senior vice president of Worldwide Product Marketing, said in a written statement.

"Lion makes upgrading a Mac easier than ever before; just launch the Mac App Store, buy Lion with your iTunes account, and the download and install process will begin automatically."

Walt Mossberg of All Things Digital called Lion Apple's "most radical new MacIntosh operating system in years," calling it a "giant step in the merger of the personal computer and post-PC devices like tablets and smartphones."

The new system, however, does not run iPhone or iPad apps (at least, not yet) and it does run Adobe Flash -- something Steve Jobs and company have summarily banished from their mobile devices.

Its touch features use a touchpad, making them similar, but not exactly the same, as what iPhone and iPad users may be used to on their touchscreens.

Mossberg said he likes the system, but warned that new users may suffer during their transition.

"Switching to Lion will require a major adjustment even for veteran Mac users, though it will be easier for those who use iPhones or iPads," he wrote. "Lion will significantly increase the learning curve for Windows users switching to the Mac."

Brian X. Chen of Wired wrote that "some of Lion's iOS-like features scale up very well, while others behave very poorly in a desktop environment."

He found the software's iPad-like scrolling feature distracting and dizzying (he eventually disabled it) but said he enjoyed the system's app-opening full-screen mode and praised new sharing and auto-save functions.

Mac OS X Lion is available as a $29.99 upgrade for people with the latest version of the Snow Leopard operating system. It will be available at Apple Stores in August for $69.99.

Lion is the latest in a long line of cat-named operating systems rolled out by Apple for its computers. Past versions have included Cheetah, Puma, Jaguar, Panther, Tiger, Leopard and Snow Leopard.

Whether the king of the jungle marks the last version of feline-named software remains to be seen -- but we're still holding out hope for Jaguarundi.