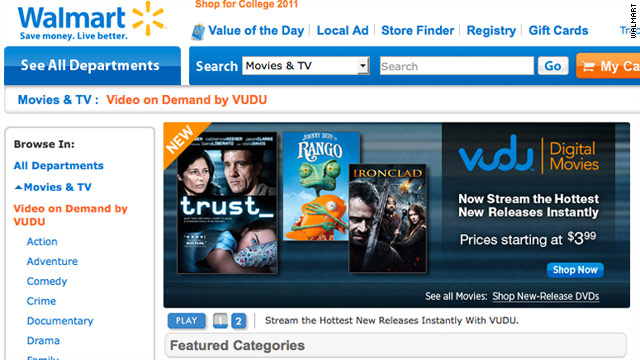 (CNN) -- Now you can stream online video the Walmart way.

The mega-retailer on Tuesday announced that it will join stalwarts such as Netflix and Amazon, offering streaming video for sale or rental on its website.

The service will use VUDU, the video-on-demand service that Walmart bought last year.

"This integration allows us to introduce more Walmart.com customers to digital entertainment and give them access to thousands of new release and popular movie titles immediately through VUDU's high-quality streaming service," said Edward Lichty, general manager of VUDU, in a written release.

Perhaps not coincidentally, the announcement from the world's largest retailer comes two weeks after Netflix announced price increases that angered some customers.

Unlike Netflix, users don't subscribe to VUDU. The top movie rentals on Tuesday were available for $3.99 in standard definition and $5.99 for full high-definition.

At that price, it's likely that avid movie buffs would pay more than they do for monthly subscription services that offer unlimited streaming. (For example, the Netflix price hike that made some subscribers mad put the cost of a streaming-only plan at $7.99 a month and streaming plus DVDs at $15.98).

But with the 200 million customers its 9,000-plus stores serve every week, Walmart clearly sees potential in consumers new to streaming video and who may be more casual film watchers.

"By incorporating digital movie content into the Walmart.com entertainment shopping experience, we're enabling customers to easily choose how they want to enjoy their entertainment content -- whether that be through a physical DVD, digital streaming or both," Lichty said.

Walmart will offer a daily 99-cent "Movie of the Day" rental, letting users vote for the movie that will be offered each Friday on its Facebook page.