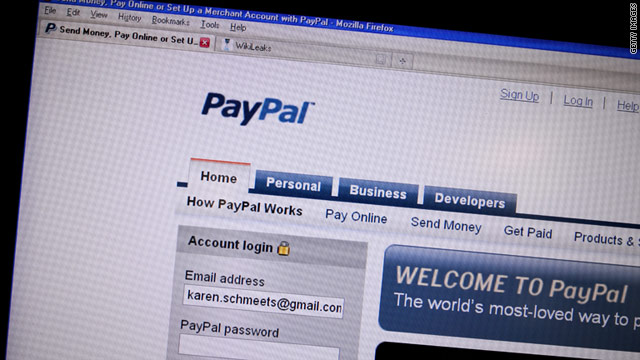 (CNN) -- Anonymous, the hacker collective that supports whistleblower site WikiLeaks, posted an "official communique" to PayPal and its customers on Tuesday, urging people to close their accounts with the online payment service.

In the message, posted on the text-sharing site Pastebin, Anonymous and fellow hackers Lulzsec accuse PayPal of being unfair for refusing to allow donations to the controversial Wikileaks and for helping law enforcement track down hackers.

"Quite simply, we, the people, are disgusted with these injustices," the message reads. "We will not sit down and let ourselves be trampled upon by any corporation or government. We are not scared of you, and that is something for you to be scared of. We are not the terrorists here: you are."

Earlier this month, the FBI arrested 14 people for allegedly hacking PayPal, which has been owned by eBay since 2002.

The hacker group has been targeting the site with denial-of-service attacks since last year, when it stopped handling WikiLeaks donations.

The missive also criticizes the FBI for arresting people involved in "ethical, modern cyber operations," saying it's unfair for people who hack as a political protest to be prosecuted like those who hack for profit.

"What the FBI needs to learn is that there is a vast difference between adding one's voice to a chorus and digital sit-in ... and controlling a large botnet of infected computers. And yet both are punishable with exactly the same fine and sentence."

So far, however, the campaign may not be having much effect.

"We haven't seen any changes to our normal operations (including account opening and closing) overnight," a PayPal spokeswoman told CNN via e-mail on Wednesday.