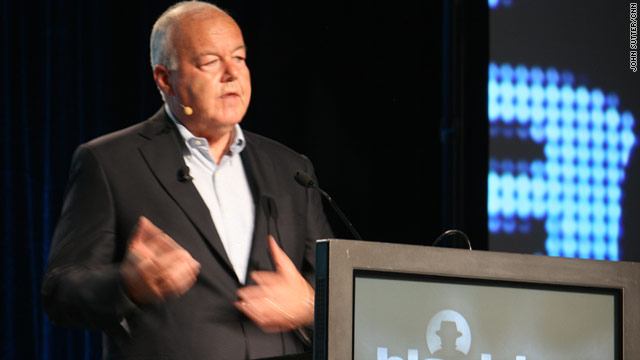 Las Vegas (CNN) -- The former director of the CIA's Counterterrorism Center raised concerns Wednesday about an impending "code war" in which hackers will tamper not just with the Internet but with technology that runs real-world infrastructure.

After a pause and some laughs from the audience, Black kept going.

"This is a very delicate window into our future," he told the hackers. "Cold war, global war on terrorism and now you have the code war -- which is your war."

It's unclear what caused the alarm -- whether it was planned to help make Black's point, was an accident or was the result of a hack. Black Hat is a computer security conference attended by thousands of hackers.

One Black Hat spokeswoman said that sort of thing happens every year at this event, and she's not sure exactly what causes the alarms.

Another said it wasn't a hack. "With over 6,500 people in here it's hard to control who pulls the alarm!" Natalia Wodecki wrote in an e-mail.

In any event, Black's siren-punctuated words carry weight, since he's credited with warning the United States government about a September 11-type terrorist attack in August 2001. Black recalled the moment he told defense officials about the threat of al Qaeda, and he compared that moment to his Black Hat talk.

Officials should be more concerned about a cyberattack, he said.

"People say, 'Were you surprised when 9/11 took place?' and I can tell you neither myself nor my people in counterterrorism were surprised at all. Instead it was a strange validation of what we had anticipated had indeed taken place. ...

"In the technology world, you may face similar issues in the future."

"I'm here to tell ya ... the Stuxnet attack is the Rubicon of our future," he said. "I don't necessarily understand how this was executed, but the important points are (that) it was really expensive, so a nation-state had to be involved."

Hacking, once see as "college pranks," has moved "into physical destruction of a national resource," he said. "This is huge."

He left the talk on an optimistic note, calling on security researchers in the audience to work to prevent such attacks.

"We're all in this together, and we're counting on you," he said.