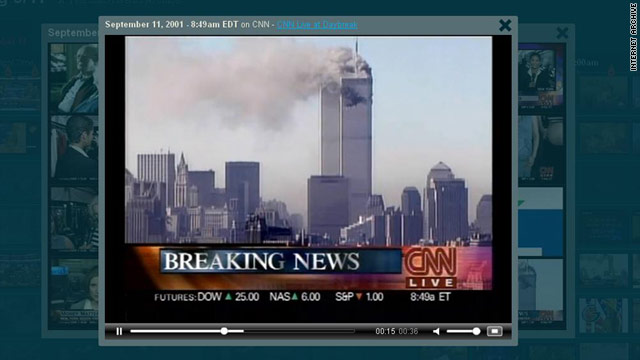 A video on the Internet Archive's "Understanding 9/11" page shows the first moments of CNN's report on the attacks.
STORY HIGHLIGHTS
RELATED TOPICS

(CNN) -- It's a time few may want to remember. But TV news reports of the September 11, 2001, attacks -- the innocuous moments before, and the horrible hours and days after -- are now archived online for anyone who cares to relive them.

The Internet Archive, a nonprofit digital library, has posted video from 20 television stations chronicling that grim week. The group's founder said the page, "Understanding 9/11," is designed to help researchers, historians and regular citizens put the attacks in context a decade later.

"We're hoping that by bringing the original material back on line, it allows us to refocus and maybe come up with a different narrative now than maybe we did then," said Brewster Kahle, a digital librarian and the founder of the archive.

The archive includes 3,000 hours of news footage from 20 networks, including CNN. The footage begins shortly before the first reports of the attack and span a week afterward.

Internet Archive is a nonprofit library founded in 1996 that started by attempting to collect every page from all websites. Later, the group added television to its mission, calling it "historically underappreciated, despite its tremendous importance."

Starting in 2000, they began collecting footage from TV stations in the United States, Russia, China, Japan, Iraq, France, Mexico and the United Kingdom.

"When the events of September 11, 2001 occurred, we, like most Americans, urgently wanted international perspectives on the United States," reads a post on the archive's Web page about the 9/11 site. "Stunned by the attacks, we tried to figure out what we could do to help."

So a group of 71 individuals and groups scrambled to compile the week's worth of news reports, which were posted one month later, on October 11, 2001.

With focus on the attacks intensifying with the approach of their 10th anniversary, the archive decided to republish the page late last month. They plan to leave it up indefinitely, Kahle said.

Clicking through the video logs, which are divided into 30-second segments to make them easy to search, it's impossible not to notice the stark contrast between the televised moments before the first airplane struck the World Trade Center at 8:46 a.m. ET and the moments after.

On CNN, the pre-attack reports included a smiling reporter delivering a light feature on a maternity-wear show at New York Fashion Week.

Then, a commercial break was cut short to go to what an anchor called, "obviously, a very disturbing live shot" of the damaged, burning tower.

The BBC interrupted a sports report and, on a local Fox affiliate, images of scantily clad models in a music video for singer Babyface appear in the thumbnail link immediately before an image of the World Trade Center.

"I'm affected by this Russian (news anchor) that is just talking so fast he's tripping over himself," Kahle said. "I don't speak Russian, but it's obvious (that) it's all this shock and compassion."

Perhaps most significant, though, are the hours and days that follow, he said. Looking at how 20 different stations from all over the world covered the tragedy provides perspective that is still evolving a decade later.

"There were different castings of the story as the days unfolded," he said. "When did people begin to call it an attack on America? When did the response turn into 'go shopping?' As people started grappling with it, I think we saw an unfolding of a narrative."