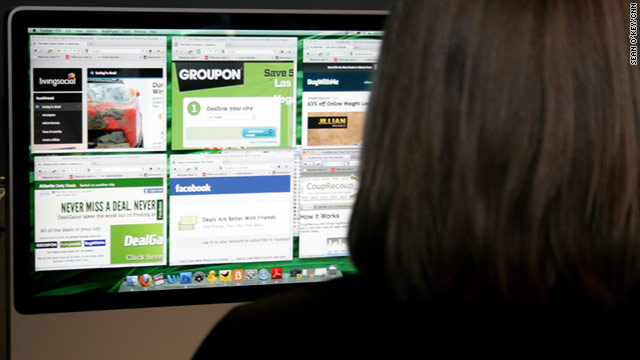 Soon I realized I was buying two or three a week -- and I couldn't stop.
STORY HIGHLIGHTS
RELATED TOPICS

We understand what you're going through because we've been there. It's a really great deal. You're probably going to go there anyway, so how can you pass it up at this price? It will confirm everything your mother thinks of you.

I'm having trouble hearing Groupon's Addiction Hotline advocate over the recording's repetitive elevator music. Nonetheless, I get the impression that she's not exactly encouraging me to kick my daily deal habit.

I know I'm an addict -- I recognize my symptoms in fellow daily deal junkies: .pdf printouts falling from an overstuffed planner; hundreds of unopened e-mails with subject lines like "40% off one-hour massage" and "3-hour walking photo class for two"; a glazed, panicked look as expiration dates loom.

Groupon spokeswoman Julie Mossler laughed when I asked her about the addiction hot line.

"We do a lot of things with a sense of humor," she said. "We heard from a lot of people that Groupon was becoming an integral part of their day ... they were staying up with friends until 12:01, at midnight, just to see what the new deal was."

OK, my obsession isn't that bad. But with each website that launched advertising deeply discounted meals and massages, I became more enamored with saving money. Couponing wasn't just for grandma anymore. It was hip. Everyone was doing it. Then I realized I was buying two or three a week -- and I couldn't stop.

Stacey Simon knows that feeling well. She started daily dealing a year ago on BuyWithMe.com in Boston. Shortly after, she discovered Groupon, then LivingSocial. Now Simon has a separate e-mail account just for her coupon site subscriptions.

She planned her wedding with deals she found online, from customized trail mix for her guests to cupcakes for the rehearsal dinner to colorful decorations for the reception.

"I'm definitely a coupon junkie," she said. "I don't see the point in paying full price for something."

Post-wedding, Simon still buys several deals a week. When she doesn't want to cook dinner, she flips through them for restaurants that deliver. When her parents came into town she took them on a Boston Duck Tour. For her birthday, she went zip-lining.

Simon uses CityPockets.com to keep track of all her deals. The website automatically imports purchased vouchers from multiple sites and then sends out e-mail reminders when a deal is about to expire. She's also sold a couple of vouchers on CoupRecoup.com.

Katherine Woo, co-founder of CoupRecoup, calls it "Groupon remorse." Her site is just one of several (Lifesta.com and DealsGoRound are the biggest competitors) that have popped up to help consumers sell unwanted or unused vouchers.

"You get overzealous and you get addicted and buy too many deals," Woo said. "Then you start to think, 'I can't use them all,' or, 'I really shouldn't have bought that.'"

Users can upload the .pdf files to CoupRecoup and get paid via PayPal; buyers get a chance to purchase a daily deal they may have missed. Since January, Woo has seen a big increase in traffic, something she says may be attributed to a growing sense of daily deal fatigue. For example, Facebook recently killed off its Groupon competitor. Could daily deals be losing their addictive pull?

"Exactly a year ago we started talking with investors for our Series A (funding) and they all asked, 'How will you compete with the big boys once they decide to enter the space?'" he said. "It's a year later and many 'big boys' have come and gone."

Payne said the market got flooded with Groupon copycats that might have caused fatigue for some. The big companies like Facebook, he said, aren't able to build the "high-touch relationship" with businesses and users that smaller outfits can.

"This is not a problem that can be solved with a server and an iPhone app," he said.

Charlene Ross has been on the daily deal wagon for a few months now. In the beginning, the blogger from Agoura Hills, California, purchased way too many daily deals. Now, she's much more conscious about what she's buying and why.

"It's like when you buy clothing (on sale)," Ross said. "It's such a good deal, and then it sits in your closet for two years before you finally donate it to Goodwill with the tags still on."

Unfortunately, there's no 12-step program for daily deal junkies. But there are some simple rules to follow, Ross said. Most important is to read all the restrictions on a deal before buying. Then make sure you're really going to use the voucher in its entirety.

Keep all your vouchers in one place -- either online or in a folder, with the expiration date clearly marked. And if you don't think you can use a deal before time is up, call the location to ask for an extension.

The conversation could start off with something like this: