The happiest place in North Korea 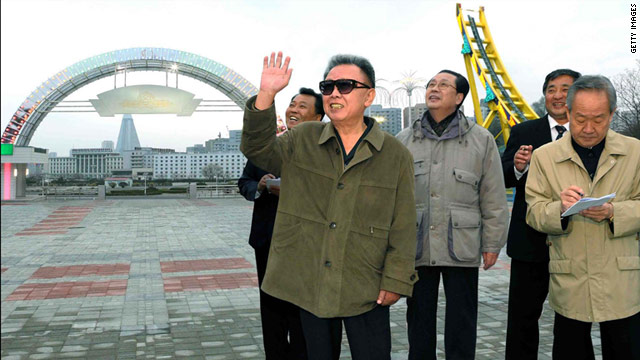 (CNNGo) -- Spy agencies scouring nighttime satellite images of Pyongyang for clues about possible conflict could be forgiven for mistaking Kaeson Park for something dangerous.

When sun sets, most of the power-starved North Korean capital is plunged into darkness. The structures of Kaeson, however, are lit up like Times Square.

So, is the country's Stalinist regime -- known to possess frightening missiles and an unchecked nuclear program -- up to something strategically important?

CNNGo: How to travel to North Korea

But rather than witnessing the surreal bleak conformity and military posturing you expect from this country on constant brink of war, he saw something that for North Korea is even more bizarre: normality.

"When you see North Koreans walking on the streets of Pyongyang, it's a bit of a robot-like experience," says Zwanzger, a German citizen who visits theme parks around the world.

"I wouldn't call it military style, but somehow they walk differently to people in other countries.

"But if you see North Koreans in the funfair, they have exactly the same habits, the same patterns as Americans in their amusement parks."

Zwanzger visited Pyongyang in October as part of an organized tour that -- in addition to an endless parade of statues and museums honoring the dictatorial dynasty of Kim Jong Il and Kim Il Sung --- took in Kaeson and the city's more elderly theme parks: Mangyongdae and Kaesongsan.

Like many outsiders visiting a country that the United Nations says is barely able to sustain its closely controlled population, he says much of what he saw was "depressing."

Inside the amusement parks it was a different story.

"When you watch the locals on the rides, it seems like the happiest place in North Korea," he says.

"They're exactly like us, they scream the same way on the fun rides and they make exactly the same faces on the roller coaster when it's dropping on the first loop."

The rides themselves are another revelation, says Zwanzger. Roller coasters apparently not being subject to the international embargoes that have added to the country's isolation, Kaeson boasts several new Italian-made rides.

He describes one year-old ride as "probably the most cutting-edge installation in the whole country." Given the North Korea's parlous economic state, it's a joke that probably isn't far from the truth.

The ride is a "belly-down flying" roller coaster that hurls passengers suspended in four-man carriages around a bright orange track.

There's another which straps passengers into a "spinning wall of death" carousel that then swings up and down on a large semi-circular track.

Other than their location in such a politically hot-tempered country, Zwanzger says none of the rides are particularly frightening.

Things are a little more sedate at the older funfairs, Mangyongdae and Kaesongsan, where many of the rusting rides emblazoned with communist red stars have been mothballed.

CNNGo: 8 things you might not know about Pantip Plaza Read

There are ancient spinning rides designed to look like rockets or aircraft painted in the colors of national flag carrier Air Koryo.

"I've been to an amusement fair next to Chernobyl in the town of Pripyat that never opened because of the nuclear power plant accident in 1986," says Zwanzger. "It is unfortunate, but these fun fairs have similarities."

Zwanzger was shadowed throughout by an official North Korean "guide," a mandatory companion for all foreigners.

"Even if you wanted to ride the coaster 10 times, he would probably join you every time," he says.

While these guides usually make locals wary of talking to visitors, different rules applied at the amusement parks, he says.

"If you visit North Korea, there's no other occasion that you can get so close to locals as in the amusement parks.

"If you go to museums, you're basically alone, then you're taken to see statues and war memorials and back to your hotel, which you cannot leave on your own.

"All day long you're with tourists so you never really have the potential to exchange a smile with a local or even start a chat if you speak Korean --but that is possible in an amusement park."

But while the locals were content to be thrilled by the ups and downs of the roller coasters, for Zwanzger, who runs thethemeparkguy.com, the biggest ride was on offer outside of the parks.

"North Korea is a time machine, a journey back to another era."