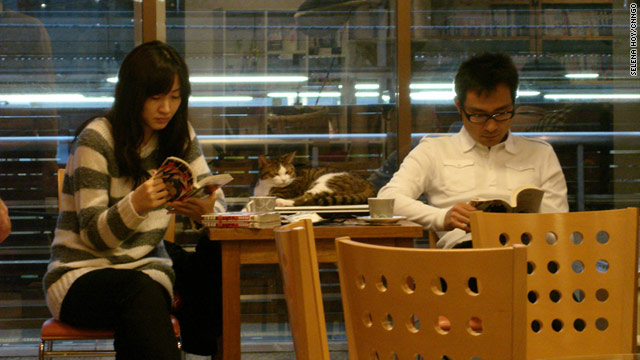 (CNNGo) -- Sip a latte, flip through a manga, surf the Internet -- or have a cuddle with a feline friend at one of Tokyo's many cat cafés.

On first glance, these popular hangouts appear to be normal, cozy cafés, with sofas, coffee cups and shelves of magazines.

Look closer, however, and you'll find something curious -- all types of cats ("neko" in Japanese) reclining on top of drink machines, in corner baskets or in the laps of patrons.

Neko cafés are a relatively recent development in Japan.

About 100 neko cafés can be found in Japan, according to the nekocafe map, with a few outliers in South Korea and Taiwan. More than 50 of the cafes are in Tokyo proper, with almost 70 in the greater Tokyo area.

Paying money to hang out with cats (the average cost is about ¥1,000 an hour, or about $12) may seem like a strange concept best suited to batty old ladies with frizzy hair and multiple scarves, but customers tell a different story.

On a recent Sunday, Neko no Mise's clientele was made up mostly of couples in their twenties and thirties, with a few singles mixed in. There wasn't a pair of bedazzled spectacles or a hand-knit sweater in sight.

The popularity of neko cafés as date spots is corroborated by a visit to Shimokitazawa's Cateriam (tel +81 (0) 3 3468 8114), where lace-skirted young women and their mohawked men ooh and ahh over the kitty antics.

"We have more couples on weekends, and more singles during the week," says a Neko no Mise staffer. "All kinds of people come to the café."

A gaggle of girlfriends squeal and shoot pictures with their mobile phones nearby. Several people sport hefty digital SLRs with big lenses.

The cat café boom has spawned countless blogs documenting cat café stars. Some cats even have their own mixi profiles.

One blogger, a Japanese amateur photographer who calls himself Jack, says he goes to cat cafés because he likes watching his favorite cats grow up.

"Cat cafés make me feel nostalgic because I had cats in my childhood," he says. "My hobby is photography -- I think the cat is one of the best subjects."

Neko cafés aren't for everyone.

"My sister wanted to go so badly, she took me to one," says a young woman named Yuko. "It was weird, I thought. People just hanging out there with the cats, but you're not allowed to wake them up or pick them up, they were just watching the cats and smiling and stuff ... it was a little scary."

With cat cafés proliferating around Japan, you can decide for yourself. Get your kitty fix, down some caffeine and maybe meet another cat-crazy single to snuggle up to.