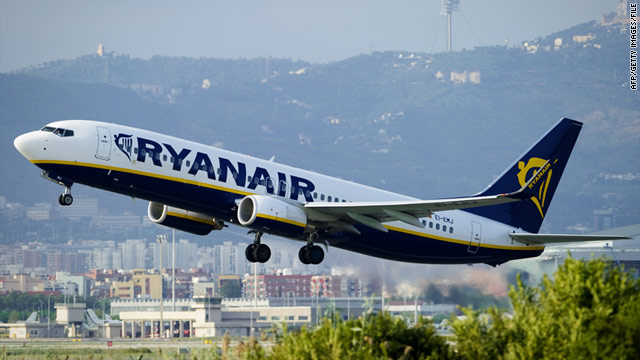 Ultralow-budget Irish carrier Ryanair is famous for its rock-bottom fares and variety of fees.
STORY HIGHLIGHTS

(CNN) -- Lots of people fume over airline fees, but one group of travelers became so enraged over having to pay extra charges that they were kicked off a plane over the weekend.

Dozens of Belgian students became "disruptive and refused to comply with crew instructions" on a Ryanair flight from Lanzarote in the Canary Islands to Brussels, Belgium, on Saturday after some of them were told to pay an oversize luggage fee at the gate, the ultralow-budget Irish carrier said in a statement.

The airline allows each passenger to carry on one bag that weighs up to 10 kilograms (about 22 pounds) and falls within certain size dimensions. Any oversized baggage is refused during boarding and can be placed in the hold of the plane for a fee of 35 euros (about $47).

But the fee obviously didn't sit well with the students. La Provincia, a newspaper in Las Palmas on the Gran Canaria Island, described the situation on board as "mutiny."

When one of the students was held back at the gate for refusing to pay the fee, the others who were already on board refused to take their seats, according to The Daily Mail. Things became so bad that the pilot requested law enforcement assistance as she was preparing for takeoff, the BBC reported.

When Lanzarote police arrived, they "required the entire aircraft be offloaded, each passenger identified. Following further disruptive behavior, the police required for security reasons that this entire group be refused travel," the airline said.

One hundred people were not allowed to fly after the disturbance. Ryanair apologized to the remaining 66 passengers who endured a three-hour delay while police dealt with the "disruptive group."

Ryanair is famous for its low base fares and variety of fees. It also gets a lot of publicity for some of the notorious fees it has suggested implementing, such as coin-operated lavatories.

Why airline fees aren't all bad

Last month, a Spanish judge ruled that one of the carrier's extra charges -- applied when passengers arrive for their flight without a preprinted boarding pass -- is illegal. Ryanair said its Spanish lawyers will appeal the ruling, which it called "bizarre and unlawful."