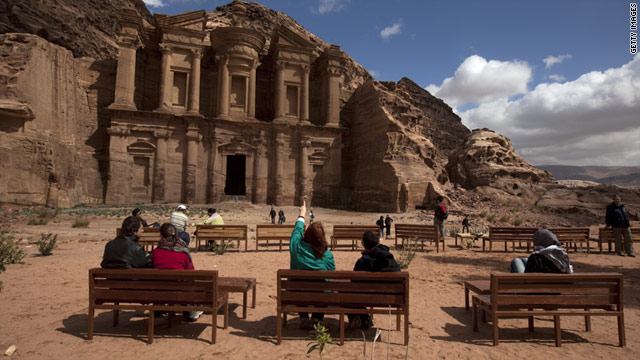 Woo her amid the sights in Petra, Jordan.
STORY HIGHLIGHTS
RELATED TOPICS

(CNNGo) -- OK, you've decided Valentine's Day is the day to pop the big question. You cheesemeister.

But picking February 14 means you're going to have to do it in spectacular fashion. And in a place in which she'll be so overcome by images of butterflies, rose petals and couples sprinting toward each other in meadows that a "No" is simply not a possibility.

These are the sweetest places to begin the rest of your life.

A poet once described Petra as "a rose-red city half as old as time."

Make this a metaphor for your own enduring romance by popping the question while this city carved into rock faces more than 2,000 years ago is lit up by rows of flickering candles.

To see Petra at its most beautiful, join a Petra by Night tour that takes visitors through the city via its most famous landmarks.

After making your way through the dramatic Siq fissure and coming face to face with the facade of the Treasury, sit on the sand and listen to local Bedouin making music from within the façade's entry.

It's the perfect moment to quietly slip the ring onto your sweetheart's finger.

What you need to know: Tours start at 8:30 p.m. every Monday, Wednesday and Thursday and last for 90 minutes. Tickets can be bought at the Petra Site Office. Visit the Jordan Tourism Board website for more details.

If your beseeching eyes can't soften her heart, the mating rituals of South Island's unusual coastal wildlife may do it for you.

Wildlife reserves near the town of Dunedin are home to colonies of hoiho (yellow-eyed penguins) and blue penguins. The Otago Peninsula also has breeding colonies of New Zealand fur seals and royal albatross.

Joining wildlife tours organized by one of South Island's many nature tour operators will help you figure out which wildlife hot spot is best for the occasion.

What you need to know: According to Elm Wildlife Tours, animal viewing is best from February to November. Tour rates start from NZ$95 (US$74).

CNNGo: Made in China is finally cool

Richard Burton romanced Elizabeth Taylor in one of the suites at the legendary Hotel Excelsior in the Croatian city of Dubrovnik.

The hotel has entertained kings, queens, princesses and heads of state. Now it can be the place where you seal the ultimate deal.

To get your lover in the mood, spend the day roaming in Dubrovnik Old Town, a UNESCO world heritage site bursting with Gothic, Renaissance and Baroque churches, monasteries, palaces and fountains.

Catch a ferry to the lover's island of Lokrum -- there's a nudist beach for the adventuresome -- but get back to town in time for sunset, best viewed from atop Dubrovnik's city walls.

At night, pop the question while gazing across at the Adriatic Sea in your suite back at Hotel Excelsior. Easy.

What you need to know: Hotel Excelsior is currently running executive suite promotions, with suites starting at 250 euros (US$341) per day.

If you and your sweetie are the adventurous types, few romantic escapades can beat a trip to Shiraz, Iran's love capital.

Since the 13th century, Shiraz has been known as the city of poetry, flowers and wine.

It's also the resting place of lyric poets Saadi and Hafez, whose compositions got Persians hot under their chadors back in medieval times.

Strolling through the city's magnificent gardens and fairytale-like mosques will put your companion in a lustful daze, making her pliant putty in your scheming hands.

What you need to know: For a full list of Shiraz attractions and accommodations, visit the Iran Tourism and Touring Online agency. Turkish Airlines and Gulf Air operate international flights to Shiraz from various cities.

The couple booked a seaplane ride through a local operator. The soon-to-be-betrothed was handed the controls of the airplane in mid-flight. Piloting the craft while flying past her resort, Bohnet spotted the message, "B. Will you marry me?" spelled out with coconuts on the beach.

Miraculously, she didn't crash the plane.

On the Maldives impeccable beaches, you can easily pull off your own version of the epic proposal -- just remember to swap the coconuts for palm fronds or champagne bottles, just to prove you're not completely unoriginal. We won't narc you out.

What you need to know: Assuming your partner lives on a deserted island and doesn't know about the story, book seaplanes via Maldivian Air Taxi. Stay at Soneva-Gili, the Maldives' top-rated resort. For price quotes on chartered seaplane flights, email reservation@maldivianairtaxi.com.

Unless you're an exhibitionist, chances are you won't want to get down on your knees in the company of fellow canoodlers. To get far from the crowds, make your way to 360° Leti.

Luxury cabins are fitted with glass-paneled walls, so you're never far from the mountain landscape, be it framed by ancient rhododendron forests, or veiled in swirling mists.

Each of the camp's four en-suite cabins has an outdoor sitting area. Rooms are heated with wooden stoves in the winter.

Get to Almora via seven-hour overnight train from Delhi to Kathogodam, followed by a 2.5-hour drive. Getting to 360° Leti from Almora requires a four-hour drive, and then a 90-minute hike.

As if that isn't isolation enough, the camp's "no Internet, no mobile phones" policy guarantees seclusion.

What you need to know: The Himalayas are best viewed from 360° Leti from October through March. Guests are required to stay a minimum of three nights. Packages cost US$1,825 per adult. For details, click here.

It's difficult to find a more fairytale setting than lavish Lismore, a stunning Irish castle dating to the 13th century.

The Gothic castle has been the home of the Duke of Devonshire since 1753, but these days it's rented out to private parties. Rentals come with the Duke's personal team of butlers, who shower guests with royal attention.

The surrounding Konckmealdown Mountains are perfect for hiking and horseback excursions. The Michelin-starred restaurant at Cliff House Hotel is located nearby.

The best place to pop the question is on the green banks of the River Blackwater, where the annual salmon run is one of the most spectacular in Ireland.

The castle can accommodate up to 23 people, so guests coming in for the engagement party will have plenty of room to stay.

What you need to know: Lismore Castle is available for 3,500 euros (approximately US$4,780) per night for up to 12 guests. For bookings, contact the estate managers.

If the idea is to make your lover feel lighter than air, try proposing in a hot air balloon over the colorful hills around Jaipur.

Known as the Pink City, Jaipur is home to sprawling lakeside palaces and heritage hotels.

Balloon flights with Sky Waltz last an hour, so there's plenty of time to get over your nerves and pick the right moment.

What you need to know: An hour-long balloon ride over Jaipur costs US$225 per person. Make booking requests through Sky Waltz.

2. The Great Wall of China

The Great Wall of China might seem like an obvious pick, but there's a way to turn the tables on your honey.

"A fantastic way to propose would be after an exclusive dinner arranged in a spectacular location on the Great Wall of China, after a dance performance featuring China's best dancers, the wall lit with a thousand candles," beams Niel Fox, founder of luxury tour operator Based on a True Story.

The suggestion is drawn from a client's experience that you can modify to make into your own timeless story of romance.

What you need to know: Costs and logistics vary. For quotes, contact Based on a True Story.

Fans of "Jane Eyre" will recall that the melancholic Mr. Rochester met and fell in love with Jane Eyre at Thornfield Hall, an isolated Gothic manor deep in the English countryside.

Charlotte Brontë is said to have based the description of her fantasy lovenest on Derbyshire's North Lees Hall.

These days, North Lees Hall has been restored to its full Elizabethan glory. Its stucco-ceiling rooms are rented out to visitors.

With the rolling English countryside in the background, and log-burning stoves roaring indoors, it's the perfect setting for your own epic romance.

North Lees Hall is located in the Peak District National Park, where you can go hang-gliding, horseback riding, caving and climbing once you've tired of indoor activity.

What you need to know: Two nights at North Lees Hall costs start at £448.80, or US$724, per person. Prices vary according to dates. Make bookings with North Less Hall's booking agency.