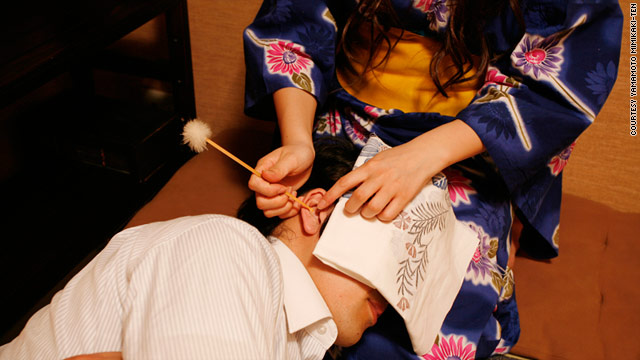 A client gets his ears cleaned with a "mimikaki" at the Yamamoto Mimikaki-ten in Akihabara, Tokyo.
STORY HIGHLIGHTS
RELATED TOPICS

Several millennia later, the Japanese have made another evolutionary leap in ear care.

Five years ago, when the Japanese government announced that ear cleaning would no longer be considered a medical procedure, thus making medical licenses unnecessary for ear cleaners, a new type of business sprung up in Tokyo and other big cities: ear-cleaning parlors, which now number in the hundreds.

Why are so many Japanese flocking to the new ear-cleaning businesses?

"They go to relax," says Yoshimi Sasaki, manager of the Akihabara branch of Yamamoto Mimikaki-ten, one of the country's largest ear-care chains.

"It's so relaxing that three out of four clients, who are mostly men, fall asleep during the session," says Sasaki. "Because of all the stress people have and lack of real-world communication due to the Internet, they want to make a connection with someone and experience healing."

The basic service at Yamamoto Mimikaki-ten lasts 30 minutes and costs ¥2,700 (about US$32). The customer is first introduced to a kimono-clad young woman who serves him tea and makes small talk.

She then places his head on her lap and covers his face with a handkerchief.

Using a "mimikaki," an ear pick made of bamboo, metal or plastic with a small scoop at the end, she gently and lovingly scrapes excess wax out of his ears, as well as massaging them and then tapping the shoulders, followed by more tea.

The necessity of earwax

It takes one week of training to acquire proper ear-cleaning skills.

Sasaki explains that it's important to learn the principles of optimal ear care, such as removing just the right amount of wax, which is vital to ear health.

"The ear canal has got fantastic protections," according to Andrew Sceats, a British ear care expert and author of "Ear Candling & Other Treatments for Ear, Nose and Throat Problems."

"One of (these protections) is earwax, which we need because it is protective against things falling in, it lubricates the ear canal and it's also antibacterial and antiviral," says Sceats.

If all the wax is removed, Sceats explains, the brain is alerted and the body is immediately instructed to produce more.

"But if someone has a filthy ear, with excessive earwax or pieces of debris in it, it can reduce hearing and lead to infections," says Sceats.

Though most Japanese ear-cleaning parlors cater to men, who may long for the maternal tenderness of their childhood, female-oriented salons have been appearing.

Working as a hair stylist for more than 40 years, Hikaru Takahashi would usually end cuts by cleaning out and massaging her customers' ears.

Some regulars, however, opted to skip the cut altogether, wanting only the ear treatment.

Five years ago, Takahashi decided to make ear cleaning the main attraction of her business, calling it "ear este."

Since then, Takahashi, who is also the head of the Japan Ear Esthetique Association, has been promoting her brand through lectures, media, a memoir and two shops.

In 2009, she introduced ear este at her Tokyo beauty salon, Beatific. Though geared toward women, 40 percent of the salon's customers are men.

Takahashi has also opened two ear este schools: one teaches women how to care for their loved one's ears, and another trains professional ear aestheticians with an 80-hour course, followed by a 10-day practicum.

Beatific spokesperson Mami Takahashi explains that ear este not only reduces stress but can also enhance beauty and overall health.

"The ear has about 400 acupressure points, the most on the body," she says. "By pushing these points, which correspond to different areas around the body, we can cure problems such as constipation, make the skin more clear and beautiful, and even help people lose weight."

Beatific's basic ear este service takes 70 minutes and costs ¥8,400 (about US$100). It begins with an ear wash, followed by massage of the ears, neck and shoulders. Then comes a meticulous ear cleaning, followed by more massage.

Other services include additional massage, facial, shave and "ear fortune telling." By looking at an ear's unique characteristics, Takahashi claims to be able to divine a person's past and personality in order to advise them about the future.

The secret of Asian ladies

Some Japanese are lucky enough to have their own in-house ear cleaner: among a Japanese mother's many duties, keeping her children's and husband's ears clean is common.

Some unmarried women perform the task for their beaus, a few of whom may even return the favor.

Those seeking a professional, yet low-budget solution to the earwax dilemma often visit a local "jibika," or ear, nose and throat doctor.

One professional in Osaka said 10 percent of his patients come for this procedure, which can take from five to 10 minutes.

The doctor places a tiny camera in the ear and projects the image onto a monitor. He points out the eardrums as if he were a tour guide of a miniature world. He looks for wax and plucks it out with tweezers.

The Osaka doctor discourages the use of Q-tips. Though standard in the West, he said it actually pushes wax and debris deeper into the ear canal.

This may explain why Sceats, the ear expert who has peered into thousands of ears, says that Asians are generally better at ear care than Westerners.

"The healthiest ears I've ever seen have belonged to Asian ladies," says Sceats, "because they have this tradition of looking after their ears."