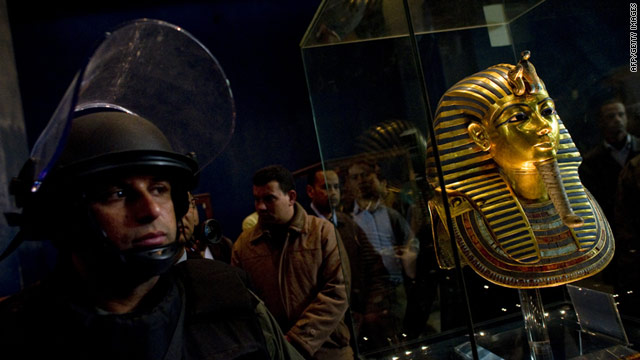 A soldiers stands guard next to Tutankhamun's gold funerary mask inside the Egyptian Museum on February 16, 2011.
STORY HIGHLIGHTS
RELATED TOPICS

Cairo, Egypt (CNN) -- Saying he hopes "tourists from around the world will soon return," Egypt's newly appointed minister of antiquities announced Thursday that tourist sites will reopen on Sunday.

"All of the Pharaonic, Coptic, Islamic and modern sites" will reopen, said a statement from the Minister of Antiquities Affairs, Zahi Hawass. The decision was made after Hawass met with members of the ministry and the Antiquities and Tourism Police to discuss security measures.

"Dr. Hawass stated he hopes tourists from around the world will soon return to Egypt," the statement said.

Hawass, former secretary-general of the Supreme Council of Antiquities, was appointed to the new post January 30 under former President Hosni Mubarak. Mubarak stepped down Friday after 18 days of protests and unrest.

There has been widespread concern about Egypt's antiquities being damaged or looted during the upheaval, particularly after reports of a break-in at the nation's main museum in Cairo.

In addition, some storage magazines in Saqqara, including one near the pyramid of Teti, had their seals broken, along with a magazine at Cairo University, the ministry said. Hawass has formed a committee to prepare reports on what, if anything, is missing.

Abusir is a pyramid field on the left bank of the Nile, north of Saqqara, where many 5th Dynasty pharaohs chose to site their burial monuments. Saqqara, one of Egypt's oldest burial sites, has several royal pyramids.

The Egyptian military caught people attempting to loot sites at Tell el Basta and a tomb in Lischt, the ministry said.

"There have also been many reports of attacks on archaeological lands," the statement said, adding that Hawass has asked all of the second heads within the ministry to prepare reports for each site in Egypt.

Hawass said Sunday that at least 17 artifacts were missing from the Egyptian Museum in Cairo. The museum was broken into on January 28, not long after anti-Mubarak protests began.

He updated that number to 18 on Monday, but said two of the missing relics -- a heart scarab and one of 11 missing Shabti statuettes -- funerary figurines -- had been found.

Hawass said he believes the looters dropped objects as they fled, and "every inch of the museum must be searched before the Registration, Collections Management and Documentation Department, which is overseeing the inventory, can produce a complete and final report of exactly what is missing," the post said. The Army was allowing few people into the museum, making it difficult to carry out a search, according to the posting.

Hawass said January 31 that the intruders had vandalized statues and display cases and stolen jewelry from the museum's gift shop. A number of suspects were apprehended shortly after the break-in, he said, some with antiquities in their possession.

The Tuesday blog post said that Hawass "would like to clarify earlier statements in which he announced that nothing was missing (from the museum)." He said when the search committee made its first pass through the museum, "objects that were at first thought to be missing were found thrown into trash cans and corners far from their original locations" and he was led to believe that all the items would be found in a full search.

"Professionals out to steal would normally be careful not to damage the objects they were planning to take, so the initial impression was that the attackers were vandals rather than thieves," the blog post said. Hawass was also misinformed by a museum staffer about a statue of the pharaoh Akhenaten and was told it was only damaged when it was missing, the post said.

"In addition to expressing what he then firmly believed, which was that museum staff would continue to locate the missing objects, his intent in these earlier statements was to reassure the world that the damage at the museum, while tragic, was far less widespread than originally feared, and to make clear that the museum's most major masterpieces, such as the Golden Mask of Tutankhamun, were safe."