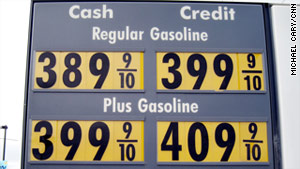 The national average for a price of self-serve unleaded gasoline at $3.51, says the Lundberg Survey.
STORY HIGHLIGHTS

(CNN) -- U.S. gasoline prices increased nearly 33 cents in two weeks, the second-biggest two-week jump in the history of the gasoline market, according to a new survey of filling stations.

The latest Lundberg Survey of cities in the continental United States was conducted Friday. It showed the national average for a price of self-serve unleaded gasoline at $3.51, an increase of 32.7 cents from the last survey two weeks earlier, survey publisher Trilby Lundberg said.

The jump was the biggest since a 38-cent hike between August and September 2005. At the time, the price increase was driven by damage caused by Hurricane Katrina.

"This time around, the spike comes not from nature, but from people," Lundberg said. "The armed struggle in Libya has shocked international oil markets and here it is at the pump."

As the fighting between opposition forces and Libyan leader Moammar Gadhafi's troops begins to look more like a civil war, expect prices to continue to rise, she said.

Prices have risen nearly 82 cents since September 2010, the survey found.

While Libya is not among the top suppliers of U.S. oil, and only 3% of Libyan oil exports head to the United States, global economics link the events there to the pumps at home.

Libya produces a light, high-gravity crude oil that is most in demand by less complex refineries around the world, Lundberg said. As this oil becomes unavailable, it forces buyers of crude to substitute crude with similar properties from other oil producers, thereby increasing demand and starting a chain reaction that raises prices of crude and gasoline in the United States.

The current average price of $3.51 is 61 cents below the all-time high price recorded in July 2008. Today's price is 78 cents higher than a year ago, Lundberg said.

On a side note, Lundberg noted that the rising gas prices could dampen the nation's economic recovery. Gas demand -- one of the reflections of the American economy -- has been growing at a rate of 1%, she said.

"Higher prices today are certainly capable of halting that gasoline demand growth, which would reflect bad news in the economy," she said.

The Lundberg Survey sampled prices at about 2,500 gas stations. Of the cities surveyed, the highest average price in the continental United States was in San Diego at $3.87 per gallon. The lowest price was in Billings, Montana, at $3.15.

California has garnered headlines lately for its high gas prices, though the average price in the state remained below $4, at $3.83 per gallon for regular gas. The average California price for premium does break that barrier, at $4.04 per gallon.

Average per-gallon prices in other cities: