Travelers urged to stay away from Japan

CNN iReport
By A. Pawlowski, CNN 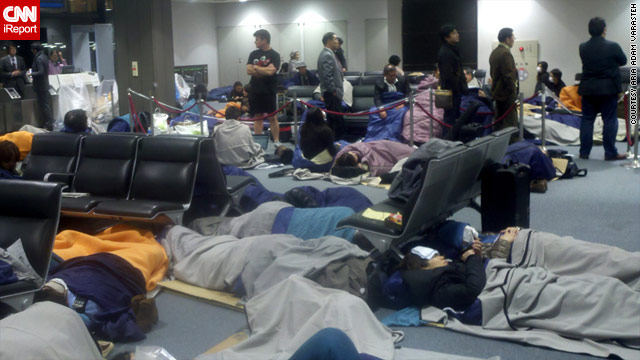 (CNN) -- Tokyo airports turned into camp grounds and dazed travelers shared tales of massive delays and cancellations Friday after a powerful earthquake disrupted flights into and out of Japan.

The disaster prompted the U.S. government to ask Americans who have travel plans to Japan to reconsider for now.

But many airline passengers who were already heading to the region didn't even know a natural disaster was unfolding.

Craig Harvey, an iReporter from Diamond Head, Mississippi, was on his way to a convention in Singapore with a scheduled stop in Tokyo when the quake struck.

After his 16-hour flight from New Orleans to Japan, his plane was suddenly diverted to another Tokyo-area airport, where the passengers were told that they would have to spend the night on board.

Harvey found out about the quake only when he was able to turn on his smartphone and check the news.

"I'm actually really impressed with how calmly people are taking this," Harvey said. "Nobody's had any major outbursts, and people have stayed really calm."

A video he shot on board shows passengers standing in the aisles and quietly chatting with each other.

Stuck at the airport

At one point, some 13,000 people were stranded at Tokyo's Narita International Airport, and 10,000 were stuck at Haneda airport, Japan's Kyodo news agency reported.

Video recorded by Erdrin Azemi, an iReporter from Pittsburgh, shows travelers sleeping on the floor in Narita airport covered by blankets and surrounded by their luggage.

Some experienced the strong tremor first hand. Richard Dong, an iReporter from Shanghai, was in the Delta Skyclub at Narita waiting for a connecting flight to Honolulu when the quake struck.

"When the shaking started, I immediately felt something is not right," Dong said. Parts of the ceiling fell off and people started hiding under tables, he said. Dong captured some of the scary moments on video.

After the shaking stopped, all passengers were evacuated from the terminal to the tarmac for about 90 minutes as the building was checked for stability, said Andy Clark, an iReporter who lives in Tokyo. He's been stuck at the airport for more than 12 hours.

But some travelers were eager to go to Japan despite the disaster.

In the United States, Mia Aquino, a CNN researcher, was about to leave for a weeklong vacation to Tokyo, her first trip overseas.

She spent a nervous few hours at Atlanta's Hartsfield-Jackson International Airport on Friday morning waiting for word about whether her flight would be canceled.

The passengers at the gate were huddled around television screens showing news updates from Japan and the quake was the main topic of conversation, Aquino said.

"Most people were optimistic they would take off for Tokyo," she said. The flight began boarding after about an hour's delay.

Japan has long been a popular tourist destination for Americans. More than 727,000 visited the country last year, according to the Japan Tourism Marketing Co.

But the U.S. Department of State on Friday issued a travel alert strongly urging U.S. citizens to avoid tourism and nonessential travel to the country for the next few weeks.

"Public transportation, including trains and subways, are closed in the Tokyo area, and service has been interrupted in other areas. Many roads have been damaged in the Tokyo area and in northern Japan," the agency said in a statement. The alert expires on April 1.

If you have plans to travel to the region, many airlines are making it easier for you to postpone your flight.

American Airlines, Delta and United have issued travel waivers for passengers flying to, from or through Japan in the next several days. The waivers will allow travelers to change their plans without a fee.

American Airlines canceled six flights en route to Tokyo on Friday, with some of the planes diverted to Anchorage, Alaska, and others to the Sapporo and Osaka airports in Japan.

"We will not be able to launch flights to Japan today," said spokesman Ed Martelle. The carrier will resume flights into Japan on Saturday.

Delta canceled 29 flights into and out of Tokyo on Friday.

Meanwhile, Japan's Al Nippon Airways says its flights to and from Tokyo's Narita International Airport may be delayed, canceled or diverted. The carrier is asking passengers to check the status of their flight online.

Cathay Pacific reports that it is likely its flights to Japan will be affected for days.

The U.S. Department of State is urging American citizens already in Japan to contact family and friends in the United States as soon as possible to let them know they're safe.

The government also has set up a special e-mail address for U.S. citizens to contact the Department of State: JapanEmergencyUSC@state.gov.

For updated information on travel and security in Japan, you can call the Department of State at 1-888-407-4747. The number is toll-free in the United States and Canada.